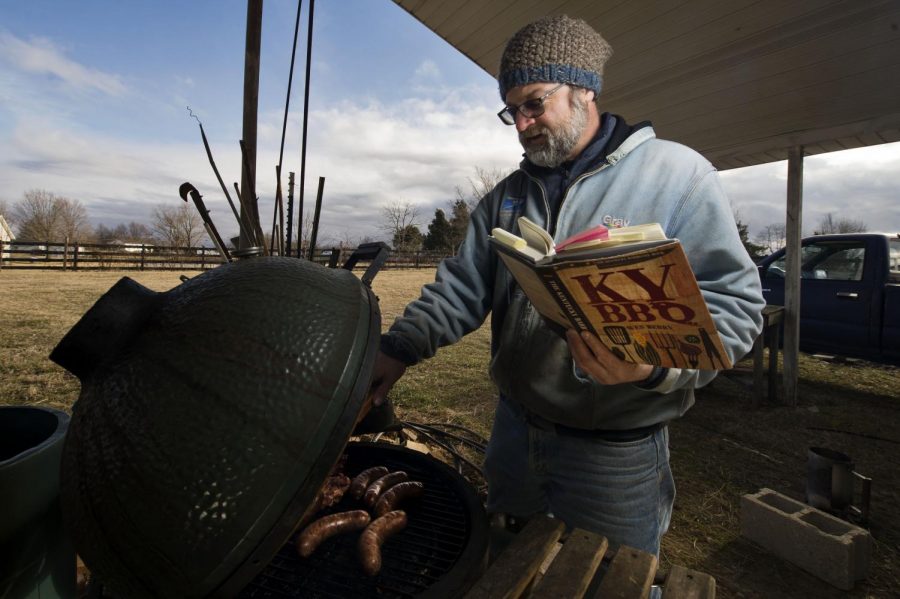 Wes Berry is an English professor at WKU who is "passionate about real tasty things." His passion for mouth-watering food stems from his time spent with his Uncle Roy, who cooked meats for Berry during chore time, and it led him to travel the United States in search of the different styles of preparing, BBQing, and eating BBQ. His travels resulted in a book published in 2013 titled KY BBQ. Now, Berry BBQs a variety meats on his smoker at his Bowling Green farmstead.

Many professors write books during the course of their careers.

However, the books they write aren’t always about what they teach.

For Wes Berry, associate professor in the English Department, barbecue became the subject of his aptly titled “The Kentucky Barbecue Book.” His reason for doing it is simple.

The book took him three to four years to write, since he traveled around Kentucky documenting his search for delicious barbecue. It was passion and his love for barbecue sauce that inspired him to write. This is his first book, and he plans to write more.

Other professors have become seasoned pros at publishing.

Bell said he grew up in a household that loved and encouraged reading. He has written twelve novels, but only seven have been published thus far.

Bell said mystery novels appeal to him, as writers should craft what they themselves want to read.

“Everyone should write the kind of story they would love to read,” he said. “I love reading page-turning novels with great characters. Only the reader can determine if my books hit that mark, but that’s what I try to do with my own writing.”

His latest book, “Somebody I Used to Know,” will be released in July.

“The Tour is living history — founded more than a century ago — and I like that my subject might resonate with people today,” he said.

It took him around three years to write the book. He is planning to write another book, about small cities in the past and how they interacted with globalization to become large cities.