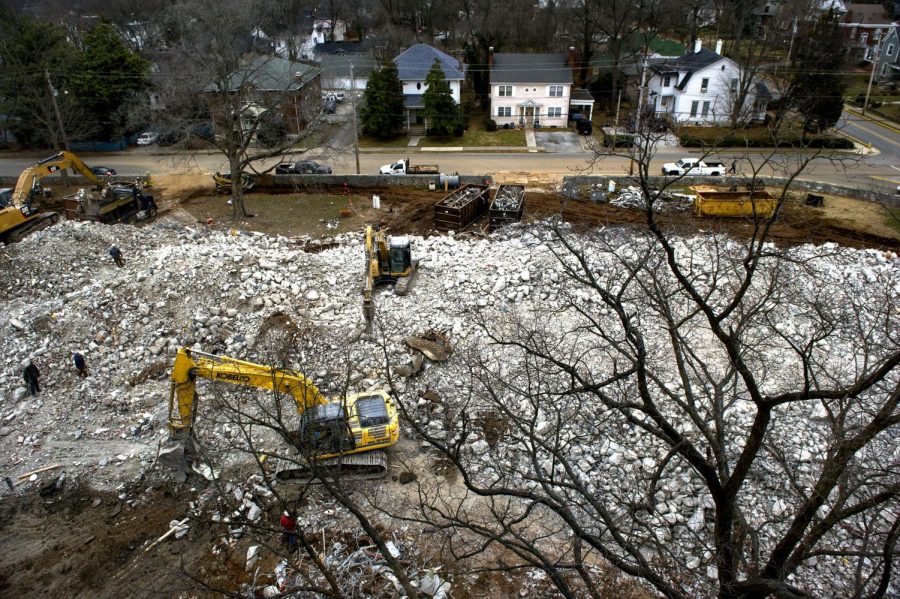 Atop the hill, Thompson Complex North Wing lies in ruins after demolition over winter break.

Bryan Russell, chief facilities officer, said the North Wing will be completely demolished by the end of January and has been a part of a ‘master plan’ of construction since 2005.

The university’s vision is to rebuild the Mathematics and Science colleges on campus.

“We are optimistic about the modern learning the new labs and classrooms will promote,” said Cheryl Stevens, dean of the Ogden College of Science and Engineering. “The building was planned to be torn down for 10 years, so we are just excited at the thought of a new facility.”

The process became tangible when the Engineering and Biological Sciences building debuted in 2004, followed by Snell Hall in 2009 and the Science and Technology Hall in 2010, which is now known as College High Hall.

The North Wing of Thompson Complex is the final project in this ongoing ‘master plan.’ Construction on the new building will begin in the later part of 2015.

Before construction begins, a process called programming has to occur. Programming is the design process in which the deans of Ogden College are asked how many labs and classes will be needed.

Over the last decade, estimated class and lab sizes may have changed, along with the technology needed to properly teach students, but the project is on schedule, Russell said.

Not only is the project on schedule, but the $48 million state-funded project is under budget.

The money will also be spent on renovating Thompson Complex Central Wing.

The new building replacing Thompson Complex North Wing is set to be completed in June 2017.

Students taking classes will be moved into the new building as the renovations Central Wing of the Thompson Complex are being done.

Russell said the overall renovation will be complete in January 2018.

Abatement of hazardous materials, steel and salvageable items were also a part of the $48 million project.

“Thompson Complex has been there since the ’60s, though it had proper upkeep, asbestos creeps into the floor tiles, roofs and wiring,” said Russell. “So we had to rid that hazardous waste from the premise properly.”

The Planning, Design and Construction department worked closely with the university and community in recycling and breaking down of the North Wing of Thompson Complex.

The Environmental Health and Safety department helped with recycling the asbestos and old lab materials, ranging from monkey bones, explosives and old refrigerators.

Outside of the the university, the Bowling Green Police Department and Fire Department used the facilities for training. BGPD and BGFD participated in kicking down doors.

For Ben Johnson, assistant director of Planning, Design and Construction, it’s been a long time coming for the completion of the Ogden College of Science and Engineering, but the wait is worth it.

“Science has changed a lot over the last decade and this new building will help the delivery of professors to teach students with proper equipment,” said Johnson.