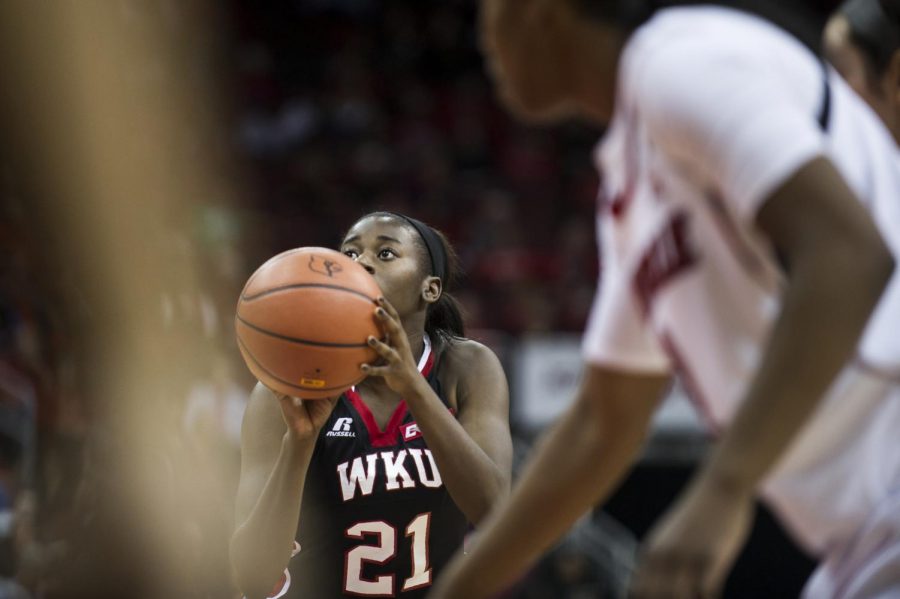 Senior Guard/Forward Alexis Govan, of San Antonio, Texas, takes a free throw in the Lady Toppers' game against the University of Louisville at the Yum! Center, November 25, 2014. Justin Gilliland/HERALD

The #24 WKU women’s basketball team lost its first game since November 25 on Saturday, losing 64-63 by a free throw with 3 seconds left in the game. The loss breaks WKU’s (17-3, 6-1) 14-game winning streak, and brings them their first loss in C-USA play.

WKU senior All-American candidate Alexis Govan led the Lady Toppers with 22 points on 8-of-13 shooting in her hometown of San Antonio.

Micah Jones started the game but left early due to an injury sustained in Friday’s practice.

The Lady Toppers saw Chastity Gooch foul out with 8:29 left in the game, but not before knocking on the door of a double double with nine points and eight rebounds.

UTSA eventually tied the game at 60 with a pair of free throws from Tesha Smith.

With the score at 62-60, WKU’s Tashia Brown hit a free throw with 51.8 seconds left to come within one before Govan aced  a pair of free throws in her hometown with 7.8 remaining to go up 63-62.

UTSA drove the baseline and was fouled before getting to the basket with 3.0 left.

Elonu hit two free throws after replacing Mananasha Bell, a 52 percent free throw shooter on the season who was fouled with 3.0 seconds, due to injury.

WKU shot 45.7 percent on the contest, but made just 1-of-7 field goals to end the game.

WKU returns home next week for a pair of games with Louisiana Tech and Southern Miss, starting with L.A. Tech on Thursday, January 29th at 7 CT.