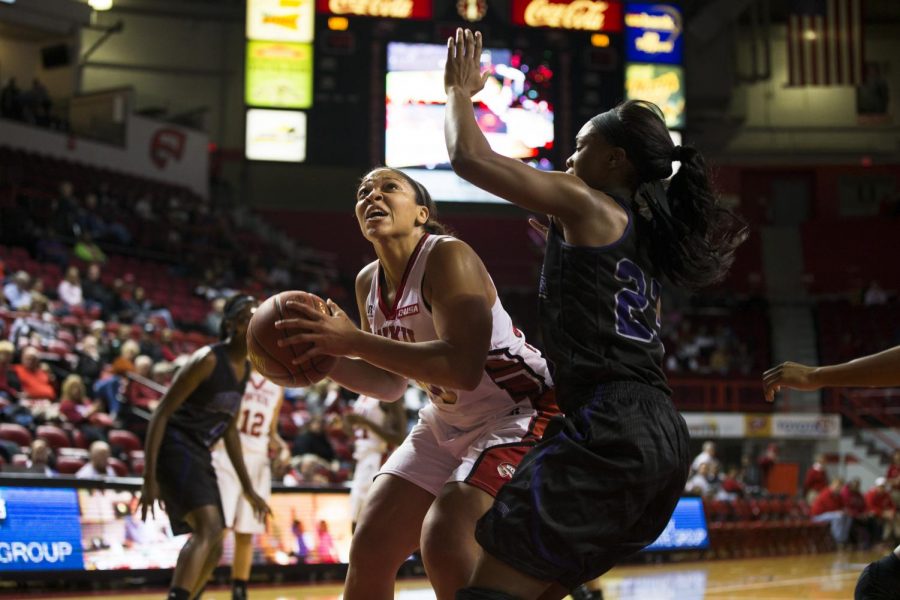 The Lady Topper basketball team shot 82.6 percent in the second half to finish off Louisiana Tech 82-66 in Diddle Arena.

After trailing the Lady Techsters 32-33 at the half, the Lady Toppers went on a 33-10 run to finish the game and give themselves their seventh win in the Conference USA.

“I am just super proud of this group,” Head Coach Michelle Clark-Heard said. “Coming out of the locker room at half time we made some adjustments and changed some things defensively.  Offensively, how they were playing us, I wanted to kind of spread them out. “

The Lady Toppers started off hot, going on a 7-0 run to start the game. Despite leading for 14:08 of the first half, WKU came out on the wrong end of five first-half lead changes and trailed the Lady Techsters 32-33 at the break.

Senior Chastity Gooch provided potency to the Lady Topper attack in the first half with 15 points including shooting 2-2 from behind the arc.

“I just want to congratulate Western Kentucky,” LA Tech head coach Tyler Summit said, son of NCAA women’s basketball coaching legend Pat Summit. “Whether they are down one at halftime or whatever, they are a championship team and they stayed the course the entire time.  You can just tell the way they are coached, that mental toughness is huge.”

The Lady Toppers reclaimed the lead their first possession of the second half 36-33 with a jumper by Chastity Gooch, though the game would not be decided by this lead change.  They leach changed hands 12 times throughout the contest, while WKU lead for a majority of the time at 28:16 of the match’s 40 minutes.

“We took the lead out of half but we were still trading baskets until about the eight or nine minute mark,” Clark-Heard said. “Then we started making some baskets—I’m just really proud of our group.”

“I thought the lane was wide open, and I knew I wasn’t scoring very well,” Noble said.  “So I thought if I could attack the lane and get their ‘bigs’ to step up then I could get the ball to my team for some easy baskets.”

The Lady Toppers (18-3, 7-1) are back in action Saturday at 2 against Southern Miss in Diddle Arena.