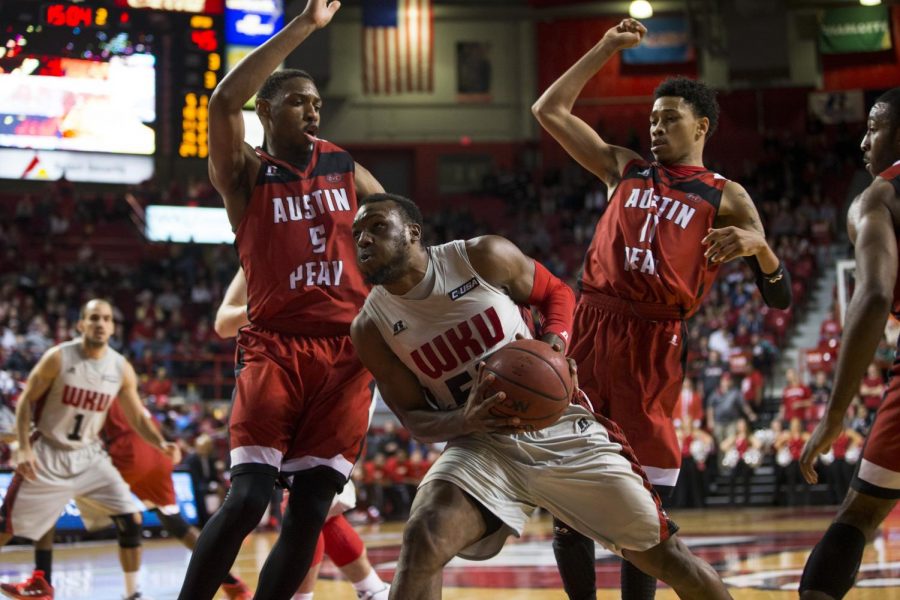 Senior guard T.J. Price (52) drives past Austin Peay's Chris Horton (5) and Khalil Davis (11) during the second half of WKU's Nov. 15 game against the Governors. Price led all scorers with 22 points and was a perfect 4-4 from three-point range as WKU defeated APSU 77-70. Brandon Carter/HERALD

Strong defense from WKU and poor shooting from the Thundering Herd allowed for the Hilltoppers to reach over 80 points for the third game in a row.

“T.J. is playing at another level right now, he does it all,” Head Coach Ray Harper said. “I talked to him at halftime, let your defense dictate your offense this second half, but be aggressive. If we are going to win this game, you have to make a statement, you have to be the guy that leads us and I thought he did. Wow.”

Price ended the first half with just three points but exploded in the second half to finish with a game high 25 , tying a career-high with seven assists, and tacked on six rebounds and four steals. The senior has now scored 20+ points in each of the last five games against Division I opponents.

“The thing that is sort of impressive is that he had eight assists tonight,” Harper said. “On the defensive end I thought he was, and I told our kids in the locker room, I thought the last play where he got a steal with :12 seconds late in the game, was indicative of T.J. all night. He was locked in. We were up 20, he was not relaxed, he was not taking that play off, and that’s who we have to be. If we are going to be a basketball team that can win games in this league, we have to be locked in and play with a sense of urgency every possession. Give him a lot of credit, I thought he did that tonight.”

Price came into Sunday’s game ranked eighth among NCAA Division I players in career three-point field goals made (238), 31 in career points scored (1438) and 62 in career scoring average (13.7). Price is averaging 20.6 points per game in the last five contests while shooting 51.7 percent from the field.

Fant was next to step up for the Hilltoppers as he contributed 14 points and 12 rebounds in what was his second game in a row posting a double-double. Fant grabbed six offensive rebounds and two steals to go along with his six-for-ten performance from the free throw line.

While Fant and Price dominated the second half, it was Clayton who shined in the first half to give the Hilltoppers the early lead. Clayton scored a career high 15 points in Sunday’s game, all in the first half. He was six-for-ten from the field including three-for-six from beyond the arc.

Marshall’s leading scorer, Ryan Taylor, led the team with 15 points and was one of three players to score double-digit points for the Thundering Herd. Marshall struggled in the second half as they shot 25.8 percent in the half and finished with 21.7 percent (5-23) from beyond the arc.

“It was a big statement,” Price said. “We aren’t going to be pushovers—I have a chip on my shoulder, we are going to prove everyone wrong.”

WKU’s next game will be Thursday Jan. 8 against Charlotte at Diddle Arena, where WKU has won 12 of their last 15 games.