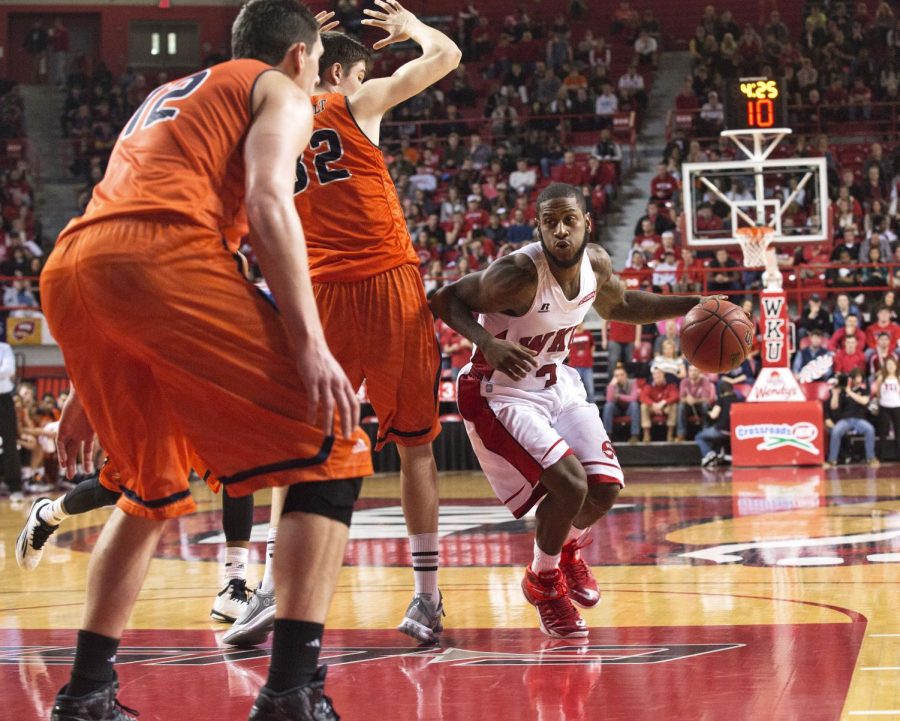 Senior guard Trency Jackson (3) penetrates the lane during the first half of the Hilltoppers matchup against Conference USA opponent UTSA. The Toppers would go on to win the game 83-74 and remain undefeated in conference play. Luke Franke/HERALD

The WKU basketball team sits atop the Conference USA with a perfect 7-0 record in league play.  After winning its last nine games, the team sits at 14-5 overall, but its 3-3 away record will be tested, this weekend, as they travel to Ruston, Louisiana to take on La. Tech—the second-ranked team in the league.

The Hilltoppers face La. Tech on Thursday at 6 p.m. CT, before clashing with Southern Miss on Saturday at 5 p.m. CT in Hattiesburg.

“We’re very excited. It’s our biggest game, since it’s our next game,” senior guard Trency Jackson said. “This is a huge game for us, and we know that. We’re ready to play ball.”

Fellow senior, George Fant has been grabbing the headlines recently, posting nine-straight double-doubles and averaging 13.8 points and 8.7 rebounds, but the experience and wisdom he has passed on to some of WKU’s younger players, this season, is starting to make an impact.

Sophomore forward, Ben Lawson has become the Hilltopper’s answer at the center position, putting in crucial minutes for the Toppers over the last two games. Lawson contributed 10 points and five rebounds in 27 minutes against UTEP and notched six points, four rebounds and six blocks against UTSA.

“He’s been more active, and that’s what we have been looking for,” Head Coach Ray Harper said. “He’s shown flashes earlier in the season, and if he can continue to do that, it really helps us… We’re going to need a good effort from him Thursday evening.”

Senior T.J. Price is averaging 17.1 points per game and currently ranks 18th in the nation in three-point field goal percentage, but has been hampered after injuring both ankles in WKU’s last road trip to Florida. It has been the play of Trency Jackson and sophomore Chris Harrison-Docks that has filled the void created by Price’s injuries.

Jackson has become the defensive leader on one of the top defensive teams in the conference. His team-high 19 steals and very vocal attitude has lit a fire under the WKU defense, all while averaging 9.9 points per game.

Harrison-Docks scored a career-high six three-pointers and led WKU with 20 points in his last game against UTSA. The guard that Coach Harper has begun using on off-ball screens and pick-and-rolls is currently the Hilltoppers second or third option to score on most possessions.

With Fant and Price performing at historic levels and providing leadership for the younger players, the WKU basketball program is reaping the fruits of their labor.

“They lead more by example which is fine. They are really starting to take ownership in this team more so than maybe earlier,” Harper said. “I see them really doing a good job talking to the younger guys and trying to help bring them along because they are so important to us as well—It always starts with your seniors. If you got good seniors, you will have a chance to have a good basketball team.”

The Hilltoppers first game this week will be at the Thomas Assembly Center in Ruston, Louisiana where the Bulldogs have won 22-straight games. La. Tech (15-5, 6-1 C-USA) sits at 6-1 in C-USA play.

The Golden Eagles (6-12, 1-6 C-USA) are the second road game this week for the Hilltoppers, having just snapped a nine-game losing streak after defeating North Texas on Jan. 24.

“It’s another opportunity for us to go out and really pull away from the pack,” Jackson said. “We are really stoked about these games.”