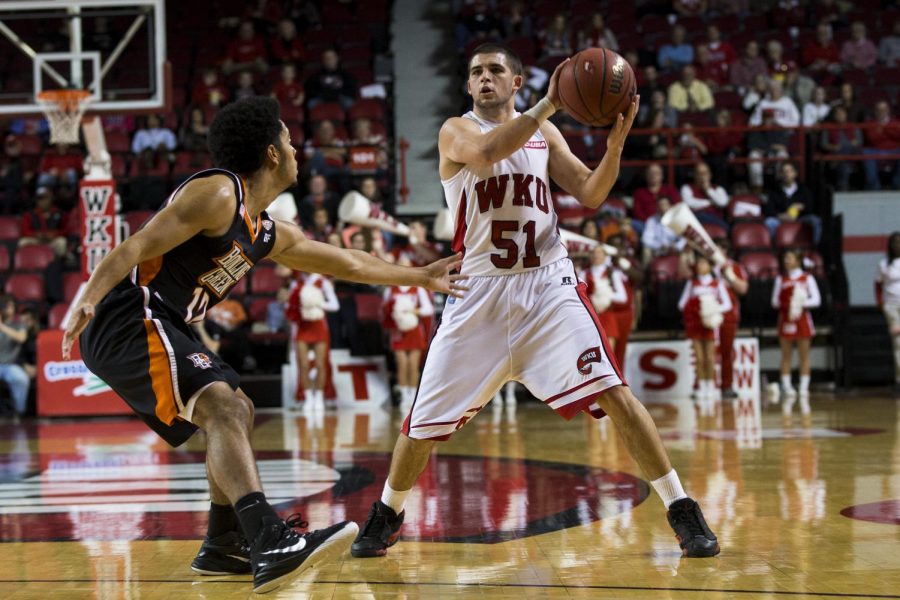 Redshirt sophomore guard Chris Harrison-Docks looks to pass the ball inside during the first half of WKU's game against Bowling Green State on Dec. 3. Harrison-Docks scored seven points and dished three assists in WKU's 62-52 victory over the Falcons. Brandon Carter/HERALD

WKU overcame a 13-point deficit with 11:54 remaining in the second half to force overtime and defeat Florida Atlantic University 88-85 on Thursday night in Boca Raton, Florida.

The senior duo of T.J. Price and George Fant scored 50 of WKU’s 88 points including a game high 27 points from Price. The game marked Fant’s fifth straight double double performance. The Hilltoppers improve to 11-5 overall and a perfect 4-0 in their inaugural Conference USA campaign.

“I told our kids I was so proud of the way they never quit,” Head Coach Ray Harper said on the Hilltopper IMG Sports Network. “Great effort by our kids to gut one out tonight.”

After going into halftime tied at 31, the Owls (7-8, 0-4) seemed in-control. The team hit a season high 14 three pointers and had limited WKU to zero players with double digit points at halftime. Both Price and Fant scored 15 points in the second half to force overtime where WKU was able to hold a slim margin over the team that was shooting over 40 percent from beyond the arc.

Price, who injured his left ankle at the end of the first half, finished with 27 points after going 10-18 from the field and hauling in eight rebounds. Fant was the spark WKU needed in the second half—scoring 23 points, ten rebounds and shot five-for-nine from the free throw line before fouling out of the game with :14 seconds remaining in the second half.

Florida Atlantic only played seven players during the contest, but three of them scored 20+ points. Marquan Botley led the Owls with 22 points including a game-tying basket with :1.8 seconds remaining in regulation. Solomon Poole scored 21 points for FAU but was only seven-of-22 from the field while Jackson Trapp scored 20 points and was four-for-six from beyond the arc.

“We looked to go small and get T.J. at the four and I thought that made the big difference for the game,” Harper said. “Anytime you can win on the road it’s a good win and now we know to finish this business trip half the job is done we got to go Saturday and try to get another one.”

WKU is now 4-0 to start conference play for the second time in three seasons. The team has won ten of its last 12 games and will face their second conference game on the road against Florida International on Saturday Jan. 17.