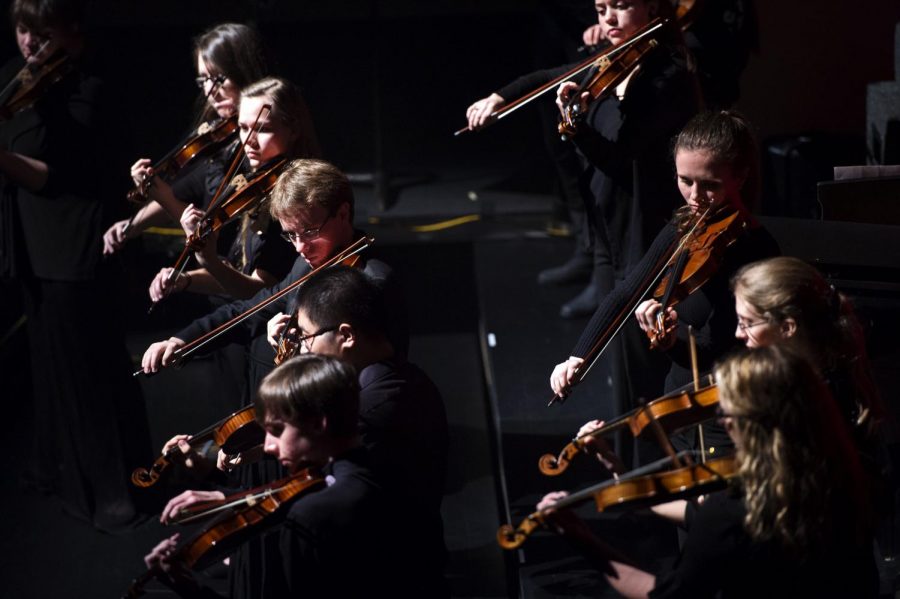 For two decades, PRISM Concert sought to display the passions of collegiate musicians while providing the audience with a unique experience. The concert combines various performers at WKU into one showcase.

The event in Van Meter Hall kicked off on Friday night at 8 to a packed house. The diverse crowd consisted of students and community members.

The event was also open to the 421 high school students from Kentucky, Tennessee and Southern Indiana who were attending the 34th WKU Honors Band Clinic over the weekend.

The concert compiled several ensembles within the department that included the Wind Ensemble, Symphony, WKU Chorale, Steel Drum Band, Redshirts, TrebleMakers and Jazz Ensemble. A total of 24 ensembles and soloists performed throughout the night.

New to the Bowling Green community, Candida Cutrer and her daughter, Corina, attended the concert, due to Corina’s excitement upon hearing of the event at school.

“She came home with the flier and said she really wanted to go tonight (Friday), so we made it here,” Cutrer said.

The pair said they would also like to attend next year’s concert when the time came.

Kristen Robertson, a junior from Greenville, came to support her boyfriend but was also excited to see all the different ensembles come together.

“[I’m looking forward to] seeing all the different groups in one concert because I don’t get the chance to go to everything, so it’s nice to be able to see most of it all at once,” Robertson said.

Students performing in the concert began preparing for the event back in August, according to Scott Harris, the head of the music department.

“It is a great, eclectic showcase of everything we do,” Harris said. “One thing that is really unique is that we utilize the entire room. A number will be on stage, while some will be in the pit, and some will be in front of the curtain.”

The showcase kept the audience engaged throughout the concert. There were even some musical jokes to help transition between performances. During an interval, the audience was asked, “What do you call a documentary about trombones? A slideshow!”

The audience even remained physically involved. During the Pep Band’s “Cupid Shuffle,” the performers ran down the aisle and played facing the middle section of the auditorium. When the band finished the song, it immediately launched into a rendition of “Stand Up and Cheer,” which brought the audience to its feet.

Clad in Hawaiian shirts, the Steel Drum Band jumped out of the orchestra pit and launched beach balls into the crowd.

Georgetown junior Emily Keith performed during the concert with the WKU Chorale and the TrebleMakers.

“This was actually my first time being in PRISM,” she said. “I watched it my freshman year, and it was so cool. Then being in it tonight kind of reminded me of how unique of an experience it is. It’s just so cool to see all these groups that you kind of forget because you’re so surrounded in your own music world, come together.”

When the concert concluded, Van Meter emptied. People made their way out into the snow, laughing and humming as they went.

Proceeds from the two performances went toward funding department of music scholarships.