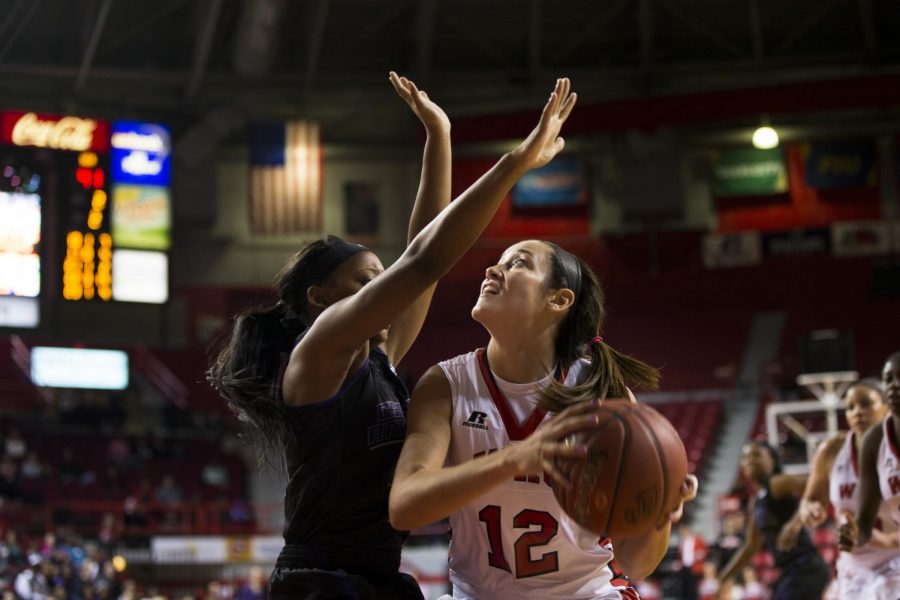 Redshirt sophomore guard Kendall Noble (12) goes up for a shot against a Central Arkansas defender during the Lady Toppers' Nov. 14 game against Central Arkansas. Noble scored 17 points and snagged 12 rebounds in WKU's 93-57 victory over the Sugar Bears. Brandon Carter/HERALD

The Lady Topper basketball team dished out a commanding 80-43 victory over Florida Atlantic University on Thursday morning as Head Coach Michelle Clark-Heard notched her 150th career win with the program.  The game marked the first ever Conference USA home game for the Lady Toppers, and kept WKU undefeated in conference play at 4-0.

WKU (15-2, 4-0) has won 12 straight games overall, the longest streak for the team since a 12-game streak during the 2007-08 season and are undefeated at home this season. The 12-game streak is the longest of Michelle Clark-Heard’s career at WKU, besting the 10-game streak that WKU entered the NCAA Tournament on last season.

“It started at the beginning,” senior Ileana Johnson said. “We played hard for the first 5 minutes, and that is what coach is always talking about.  Coach always says the first five minutes of a game determines how the game is going to be played.”

“Our defense is really what we have been focusing on,” Head Coach Michelle Clark-Heard said. “There were times today when we were everywhere we needed and that really put us in a position to do the things we did today.”

From that point on WKU controlled the pace of the game.

With 12:56 left to play in the first half Gooch was subbed out of the game after taking an elbow from an FAU defender in the paint. Gooch was taken to the locker room for the remainder of the first half where she received stitches to a cut near her lip.  She would return in the second half, but played just 15 minutes total in the game, notching 8 points and 2 rebounds.

“Chastity is fine,” Clark-Heard said. “She was able to come back and make an impact for us in the second half.”

Thirteen first-half points from Govan and Johnson each helped WKU to a 48-20 lead at half time.  Kendall Noble led the boards in the first half with five rebounds and added seven points and two assists.

The second half saw all 12 Lady Toppers receive playing time, where a complete performance from the entire team gave way to no Lady Topper scoring in the double digits, yet the team culminating 32 second-half points.

“It is a big deal for us,” Govan said of the continuous effort that comes from the Lady Topper bench. “It’s mid-season, people are getting tired, and it is great to have players that can come in and you don’t lose anything.  We sub, but we keep the consistency and energy and that has been really important for us.”

Three Lady Toppers ended the game with double-digit points.  Govan lead the pack with 17 while Johnson ended with her 13 first-half points and Kendall Noble notched 12.

The Lady Toppers stay at home for Saturday’s contest against Florida International University.  Tipoff is set for 2 P.M.