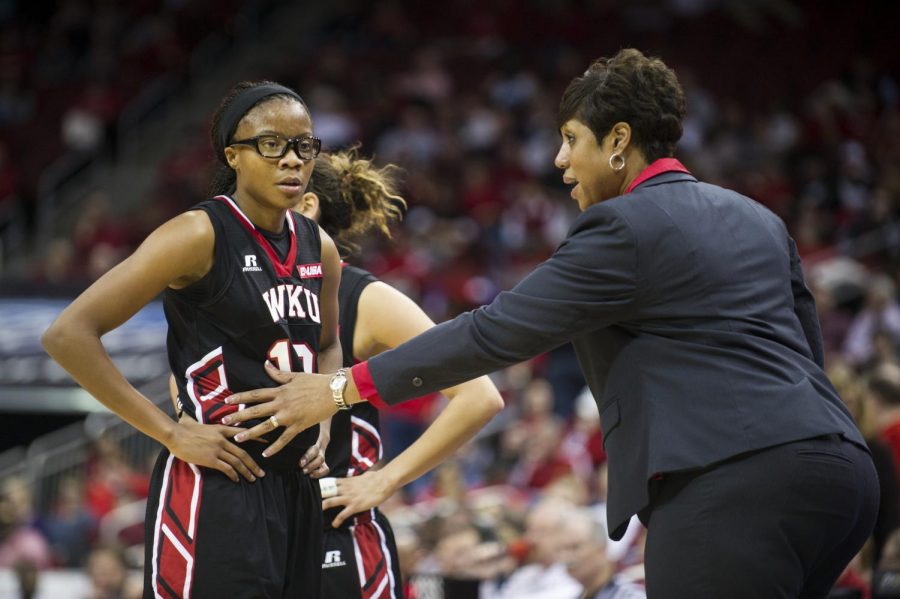 Head Coach Michelle Clark-Heard converses with Tashia Brown during a timeout in the Lady Topper's game against the University of Louisville at the Yum! Center, November 25, 2014. Justin Gilliland/HERALD

WKU Lady Topper Basketball cracked the Associated Press Top 25 poll for the second time this season. The Lady Toppers received a No. 24 ranking with 80 points in the poll in the midst of a 13-game win streak.

“We don’t talk about the win streak.” Head Coach Michelle Clark-Heard said. “Of course with the Internet and social media, they know about it, but we don’t emphasize it.  We emphasize getting better each and every day. We take it one game at a time and focus on our game plan for that game.”

The Lady Toppers took a one-week hiatus from the poll last week after uncharacteristically dropping out despite not losing a game. WKU’s rare non-defeat driven exit was just the fifth time since 2000 that a team had dropped out of the rankings without losing.

All-time, this week’s appearance in the AP Top 25 poll is the Lady Toppers’ 178th in program history. The Lady Toppers have received votes in every poll this season.

Going into this week’s two-game Texas road swing, WKU (16-2, 5-0) is the only remaining unbeaten team in Conference USA play, notching a 5-0 record to start conference play for the second time in three seasons.

“This will be a really good experience for us and for our team,” Clark-Heard said.  “UTEP has done some amazing things and I think we are just looking forward to being in that atmosphere; they went to the championship of the post-season NIT last season.”

“We just need to take care of the basketball and do the things we need to do,” Clark-Heard said. “We need to be strong defensively—make sure we are covering their players in the post like we need to be, and we need to rebound the basketball. That is one thing we really need to focus on.”

WKU is now 16-2 or better through 18 games for just the fourth time in program history—last championing the feat in the 1994-95 when the Lady Toppers were 17-1.

In both home games last week, WKU held a double-digit lead before its opponent even scored. The Lady Toppers started the FAU game off on a 21-0 run while starting off on a 13-0 run against Florida Atlantic. Both games contributed to WKU’s total of three games this season where the Lady Toppers held their opponent under 50 points.  WKU has won its last 11 games by double-digit points.

The Lady Toppers have now won consecutive games and consecutive conference games by at least 30 points for the first time since the 2007-08 season.

“We don’t talk about it… ever,” senior Alexis Govan said of the win streak. “Coach Heard will mention it and we will all just be like ‘oh, really?’ We just try to focus on the next game up.”