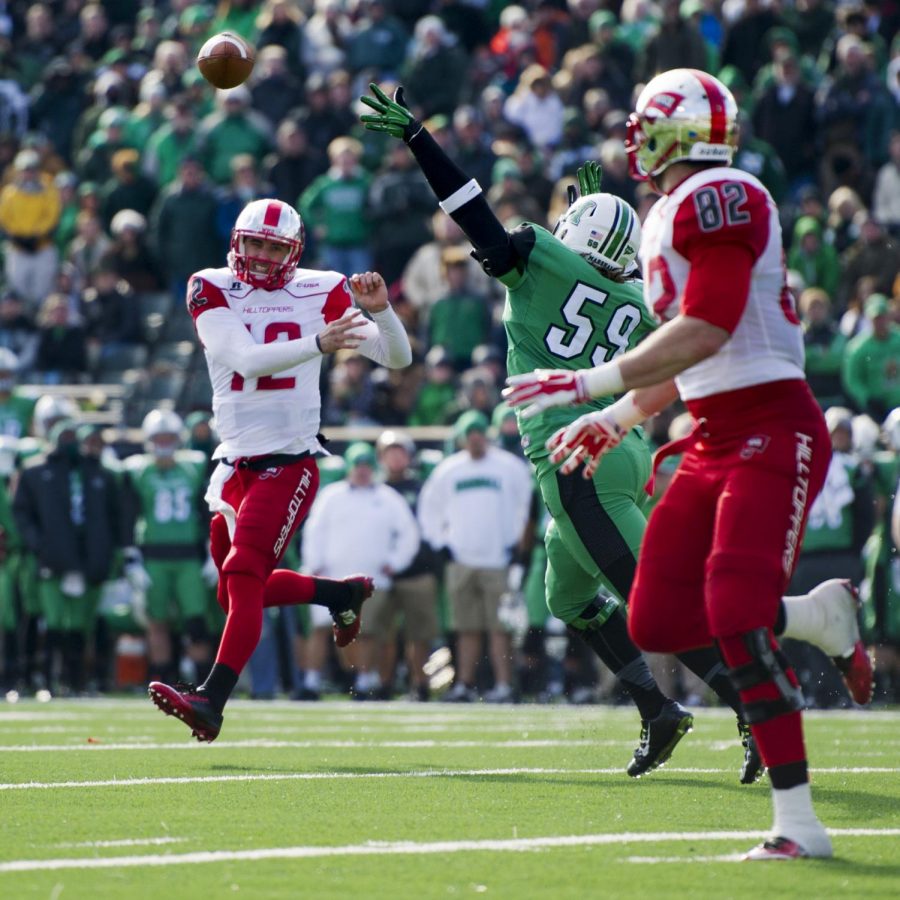 WKU's Brandon Doughty (12) releases the ball toward Tyler Higbee (82) during Friday's 67-66 overtime victory over No. 19 Marshall in Huntington, West Virginia. Higbee would catch the pass and score for a seven-yard touchdown. Nick Wagner/HERALD

The Hilltoppers took the field at Smith Stadium today for their first of nine postseason practices in preparation for the Popeyes Bahamas Bowl that will pit WKU against Central Michigan.

The team will hold practices tomorrow, Saturday and Dec. 16-19 before departing for Nassau, Bahamas on Dec. 20. The Hilltoppers will then hold their final preparations on Dec. 21 and Dec. 22 before the 11 a.m. CT kickoff on Dec. 24.

The program’s second bowl bid marks a rematch of the first, as the Hilltoppers dropped a 24-21 decision to the Chippewas in the Little Caesar’s Pizza Bowl two years ago.

For the players who made the trip to Detroit in 2012, this matchup means revenge.

“It’s a great opportunity,” senior tight end Mitchell Henry said. “We’re looking forward to it — forward to a rematch, getting a little revenge in. We know they got us in 2012 … We’re on a high. Everybody’s excited to be here.”

Redshirt senior offensive lineman Cam Clemmons said he still remembers the team’s disappointment after coming up just short on a last-ditch drive that could have clinched a victory.

“In 2012, we got the bowl and as much fun as we had, we still remember the bad taste from losing that game,” Clemmons said. “I think there’s enough experience and enough leadership on this team to not let that happen again.”

With a tropical destination like the Bahamas in the Hilltoppers’ future, it’s easy to get distracted; however, Henry said the team has one thing in mind: making history.

The Touchdown Club of Columbus has named Doughty its 2014 Sammy Baugh Award winner a day after he took home Conference USA MVP honors. The award is given to college football’s top passer.

Doughty is the only WKU quarterback to be named Sammy Baugh Award winner and just the third in Conference USA history.

Doughty finished the 2014 season as the nation’s leader in both passing yards (4,344) and passing touchdowns (44) while having established 14 single-season and single-game program records.