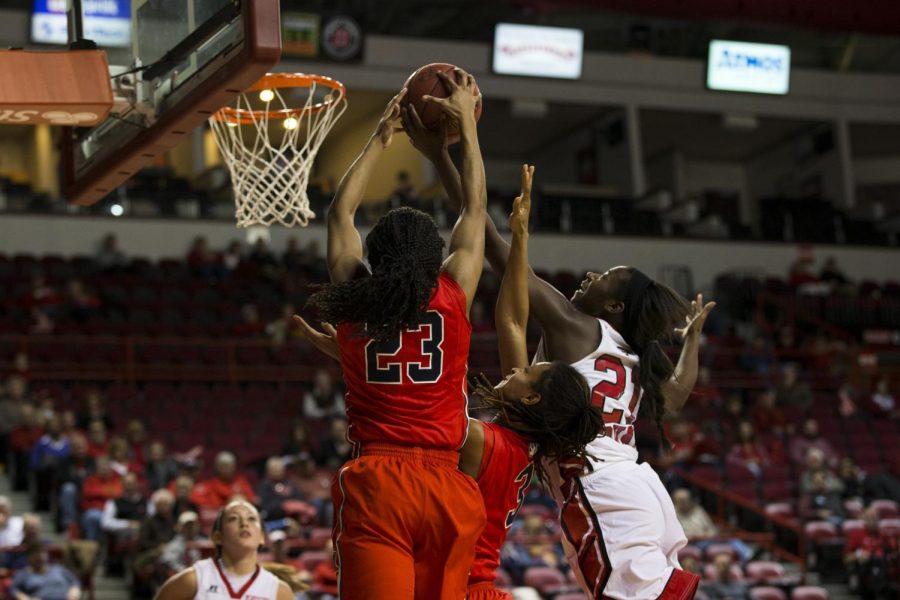 Senior guard Alexis Govan jumps for a rebound against two Ole Miss defenders during the second half of WKU's game against Ole Miss on Dec. 4. Govan led all scorers with 22 points as the Lady Toppers defeated the Rebels 98-69. Brandon Carter/HERALD

The Lady Toppers used early runs in the first and second half to pace a 98-69 win over Ole Miss on Thursday, marking WKU’s first win over a Southeastern Conference opponent in approximately six years.

The Lady Toppers led by as much as 42, outscored Ole Miss 24-8 in fast break points and assisted on 23 of 30 made field goals.

“We shot the ball actually really, really well tonight,” Head Coach Michelle Clark-Herad said. “What I told them, and the staff and I talked to them about was, when you have open shots, shoot them with confidence. This was a game that I’m really excited the ball went in the hole for us early.”

Senior guard/forward Alexis Govan, who came in averaging 17.8 points and 6.4 rebounds in the past five games, put together a 22-point, seven-rebound performance to pace WKU.

“We put it together on offense,” Govan said. “We started off the game sitting down and guarding on defense, and that was really important for us.”

The Lady Toppers will look to extend its current eight-game home win streak on Saturday against Alabama State at 2 p.m.