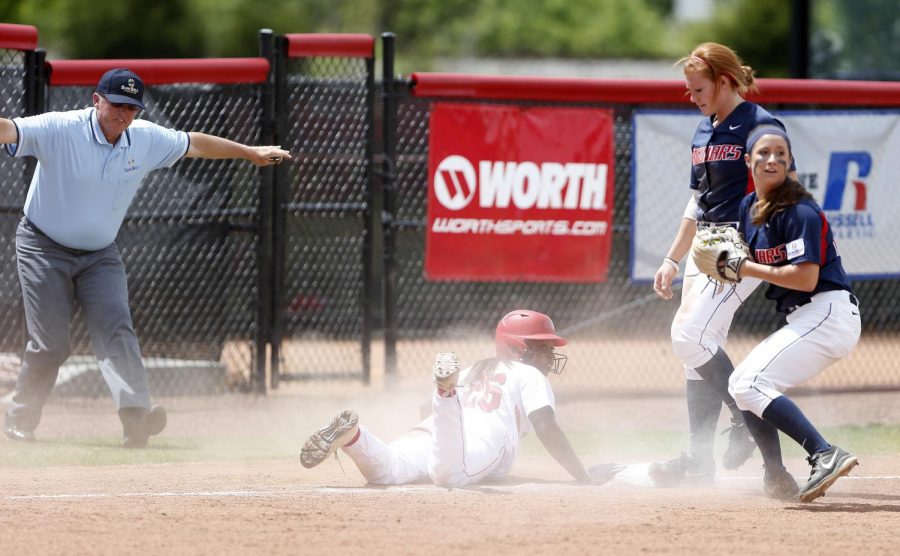 Senior outfielder Shawna Sadler slides into third base to avoid a double play during their 3-2 loss to South Alabama last season. (Ian Maule/HERALD)

Florida State and Kentucky made it to the Women’s College World Series.

“This is definitely going to be a tough schedule,” Tudor said in a press release. “We have eight seniors that will lead us to make this class one of our strongest classes to come through here. When making the schedule, I felt like we needed to play tough teams and tough competition to get us ready for our first season in Conference USA and hopefully build for the NCAA Regionals and beyond.”

The Lady Toppers will face Buffalo in Troy and Alabama on Feb. 6 to kick off the season.

The following weekend WKU will travel to Tallahassee to compete in Florida State’s Unconquered Invitational. The Lady Toppers will face the Seminoles along with Michigan, Nebraska and Georgia Tech.

The 2015 schedule will also feature back-to-back tournaments hosted by the softball program.

The C-USA Tournament takes place May 7-9 in Miami, Florida.

“We have three SEC teams, two Big Ten teams, two ACC teams and an AAC team—it doesn’t get much better than that in my opinion,” said Tudor in a press release of the non-conference slate. “I feel that the girls will be gearing up and ready to go for that challenge because I feel that this season will be a challenge. Playing all of these opponents on the road will hopefully help us in Conference USA, as our goal is to win the C-USA championship. I’m looking forward to it, though. I feel like it is brutal, but challenging, and that is why you do it.”