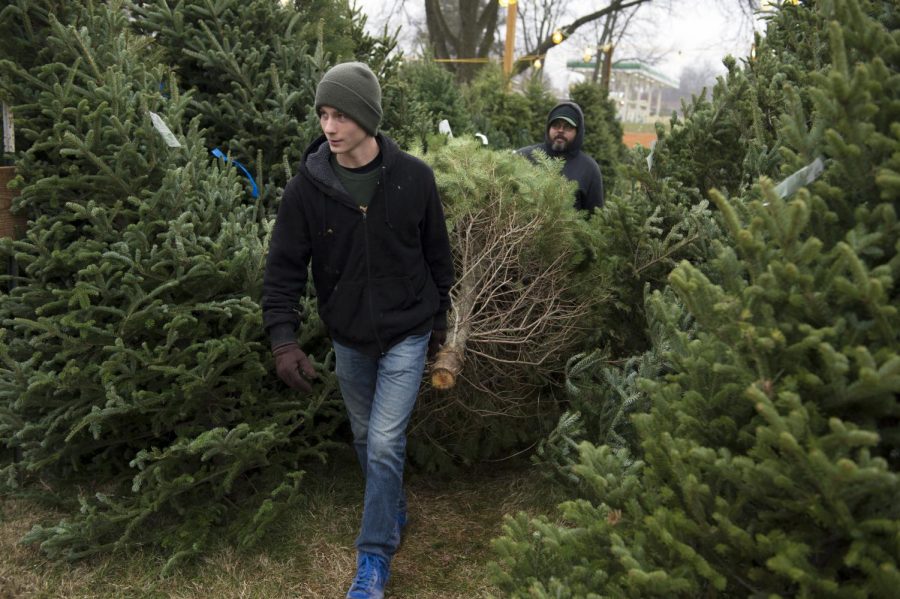 Freshly cut garland strands sit ready for purchase at Morgan's Fresh Cut Trees in Bowling Green on Monday. The garlands, trees and wreaths are shipped in from a Michigan tree farm. Nick Wagner/HERALD

Around the Christmas season, the scent of pine trees, Fraser firs and canaan firs are abundant as trees line the lot next to the Lost River Cave gift shop.

Morgan’s Fresh Cut Trees is home to the aforementioned trees, as well as grand firs, conicals, Douglas firs, white pines and many others.

Morgan’s celebrates its fifth year in Bowling Green this season, having expanded to lots in Nashville, and other areas across Tennessee and Kentucky.

The business was started by Cindy Burk and her husband, Paxx, who both act as co-owners in the business, which opened for the season last Friday, Nov. 28.

The trees that line Morgan’s were all grown in Hart, Michigan.

The trees made their way to the Bluegrass after the Burks’ daughter, Morgan, formed a bond with a regular customer that shopped at her farmer’s market stand. This simple event later sparked conversation and resulted in this customer asking the Burk family if they would be interested in starting a tree lot of their own.

Thus, Morgan’s Fresh Cut Trees began, with the family business being named after Morgan, who routinely lends a helping hand at the lot. A portion of the funds from the trees also go to help Morgan.

“A percentage of the profits goes into her college fund,” Burk said.

Burk said that quite a bit of work goes into growing the trees and setting up the lot. She also highlighted many of the differences that surround the various types of trees they have. Some trees have to be cared for differently to ensure they all grow tall enough for the holiday season.

She said that many people are unfamiliar with having a real tree, as opposed to an artificial one, and have many questions surrounding the care of a real tree.

“There’s a variety of questions that people have and we’re happy to answer,” Burk said.

She further elaborated on the care of having a real tree. She said real trees need attention, with proper nutrients needed to keep them full and green through the holidays.

“People tell us once they’ve tried a real tree they can’t go back to artificial trees,” Burke said.

Bowling Green resident Robin Emberton said this was her fourth or fifth year in a row of purchasing a tree from Morgan’s. She continues to go back because the people there are helpful and they often hire younger people to help with the business. She also loves the smell of the fresh trees.

Bowling Green resident Harris Napier works for Morgan’s. Napier said that he went to Morgan’s last year to purchase a tree and decided to come back this year to help the business. He said his job involves taking the tree down, netting it, loading it in someone’s car for them to take home and replacing the purchased trees with new ones.

“We make the best of it and have a good time,” Napier said.

Burk said families enjoy coming to pick a tree together.

“People come and bring their cameras and their children to pick out a tree,” Burk said.

Morgan’s also sells to a lot of students and faculty of WKU, according to Cindy Burke. She said that customers often come looking for apartment sized trees and that they want something to bring into their home for the holidays before going home themselves.