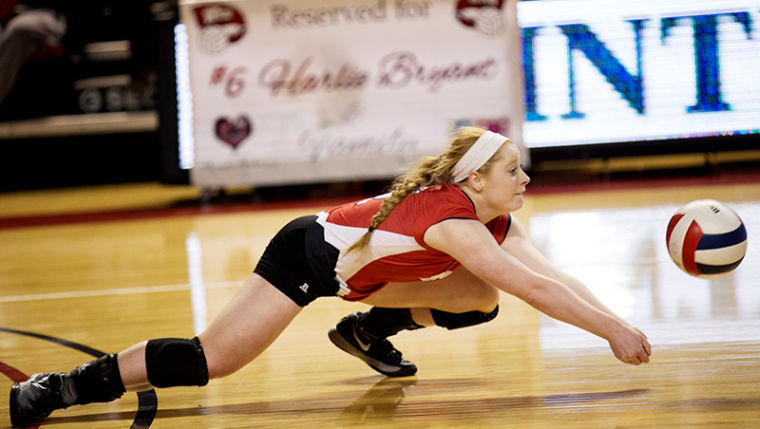 Defensive specialist Georgia O’Connell (12) gets a dig during WKU’s 3-0 win against the University of Louisiana Lafayette Nov. 8, 2013, at E.A. Diddle Arena in Bowling Green, Ky.

The honor comes after WKU tabbed two more road victories this past weekend against Southern Mississippi and Marshall.

O’Connell reset her digs record this weekend, tallying 23 against Southern Miss and 25 against Marshall.  She accounted for 48 of WKU’s 128 digs in the two matches.

This marks the first time this season the defensive player of the week award has been given to O’Connell, while teammate senior middle hitter Heather Boyan has received the honor twice.

The Lady Topper offense has been illustrious this season as well, with freshmen outside hitter Alyssa Cavanaugh and junior middle hitter Noelle Langenkamp both nabbing offensive player of the week honors, and freshmen Jessica Lucas nabbing two setter of the week honors.

The Lady Toppers look to carry their momentum forward to close the regular season this weekend at home against UTEP and Middle Tennessee.