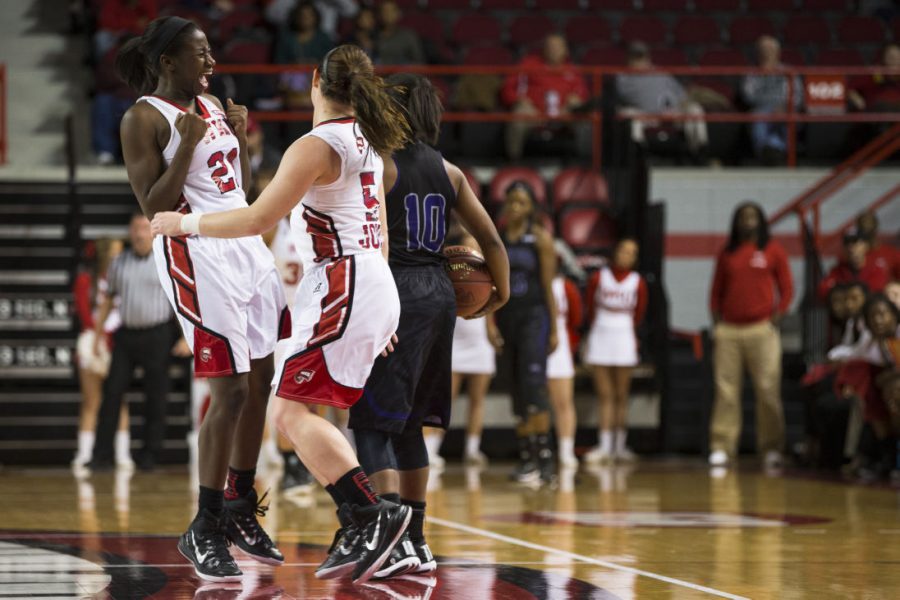 Senior guard Alexis Govan (21) and junior guard Micah Jones (5) celebrate after forcing a turnover during the first half of WKU's Nov. 14 game against Central Arkansas. The Lady Toppers forced 22 turnovers in their 93-57 victory over the Sugar Bears. Brandon Carter/HERALD

Senior forward Chastity Gooch tallied 30 points, 11 rebounds, three blocks and three steals en route to the Lady Toppers’ 79-78 win at Colorado in the second round of the Preseason WNIT on Monday.

WKU (2-0) moves on to face Albany on Thursday at 7 p.m. in Diddle Arena in the semifinals of the Preseason WNIT.

Junior guard Micah Jones recorded 20 points and was seven-of-seven from the free-throw line, which included some clutch free throws down the stretch.

The Lady Toppers shot just 35 percent from the field and 13 percent from three-point range, but managed to force 24 Colorado turnovers and held the Buffs to 38 percent shooting.

The winner of Thursday’s semifinal bout will move on to the championship game against the winner of West Virginia and Mississippi State.