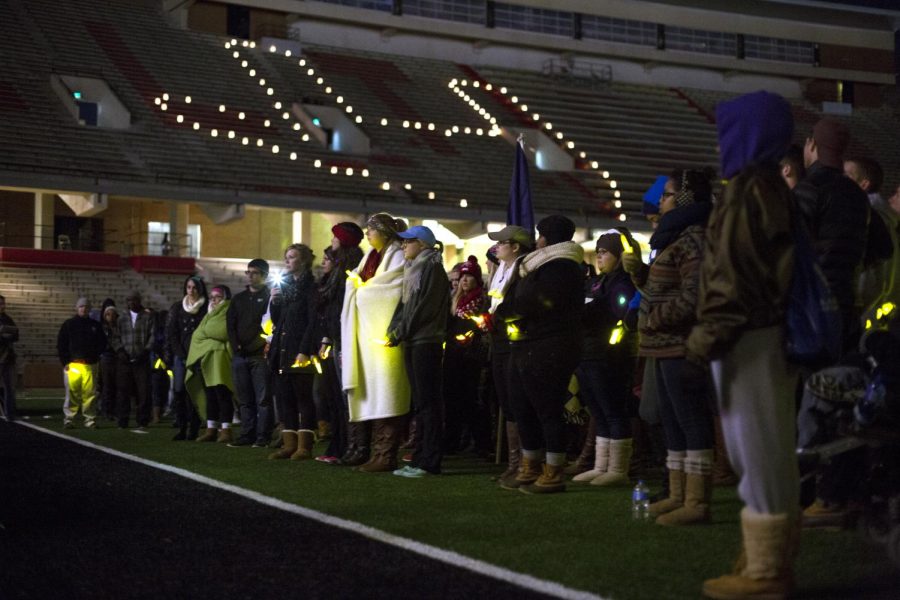 Participants in the 2014 Relay for Life event listen during the Luminaria Ceremony, honoring those who have fought or are currently fighting cancer. Lit luminaries in the bleachers formed the hand sign for "I love you" in honor of the Sparks family. Brandon Carter/Herald

Candles burned in the stands of Smith Stadium Saturday night forming a giant glowing hand that signed “I love you” in American sign language.

About 300 Relay for Life participants lapped around the field carrying glow-sticks while the song “In Christ Alone” by Passion echoed in the stadium.

The ceremony honored Crestwood senior Luke Sparks’ father and others impacted by cancer.

David Sparks has stage 4 kidney cancer and was recently told by a doctor that he has weeks to live.

Mt. Washington senior MeriCatherine Small, chapter president of Alpha Xi Delta sorority, spoke about the Sparks family and how the “I love you” hand sign reminds them of heaven.

“It’s something that’s very meaningful to the Sparks family and to everyone that’s really close with them,” Small said.

Participants from 28 teams gathered for a night of cornhole and hula-hoop contests to sell waffles, hot chocolate and other treats to raise money for cancer research. Goshen sophomore Tony Piedmonte volunteered at the event and wore a picture of family friend Lyne Church.

“She passed away this week on Tuesday,” Piedmonte said.

Piedmonte said Church was diagnosed with a rare form of brain cancer and that she survived a year before losing her battle. Piedmonte described cancer as a universal disease.

“It really is an undiscriminating disease,” he said. “It’s a problem for everyone. So I think it’s really important that people continue to come out and support people because people can be healthy and then they can just not be and it’s really shocking and people really need that support and love.”

The night’s events began with a small Survivor Reception in Downing Student Union hosted by Louisville senior Kelsie Price. Price suffered from leukemia herself when she was 12 years old. She’s been in remission since 2005.

Price said her family helped her get through her battle with cancer.

“My dad always made sure I had a smile on my face,” Price said. “He would always sit up there at the hospital with me for hours and days at a time just making me laugh, and my mom was just always there.”

Price said her mother missed work and made a lot sacrifices for her when she was sick. Her mother later developed lung cancer while she had lupus.

“So she died about three or four years later after I got well,” Price said.

Price met Ciera Hobgood, a freshman from Louisville, while she was mentoring kids at Camp Quality in Louisville where kids with cancer can enjoy s’mores by campfires, horseback riding and swimming.

Hobgood was in remission for brain cancer she developed when she was 6 years old.

Hobgood and Price have been friends ever since.

“Camp is only for a week, and so after that we got each others’ numbers and stayed in contact,” Hobgood said. “I actually didn’t know she worked here at WKU until like my second week of school.”

Kathryn Steward, assistant director of Health Education & Promotion,  attended the reception with her family. Steward would have been five years cancer-free this August, but in December 2013 doctors found a spot on Steward’s lung. They found out it was cancerous in January of this year.

Steward said her treatment is different from chemo and that it focuses on stopping the estrogen the cancer feeds on. She said the tumor has shrunk since she started treatment.

“From June to August it dropped from like 13 millimeters to 5 millimeters,” Steward said.

Steward stressed the importance of cancer research and support Relay for Life offers.

“What I also love is that they treat the families great, and they are a huge piece of how survivors get through it or people battling it get through it because the support network,” she said.