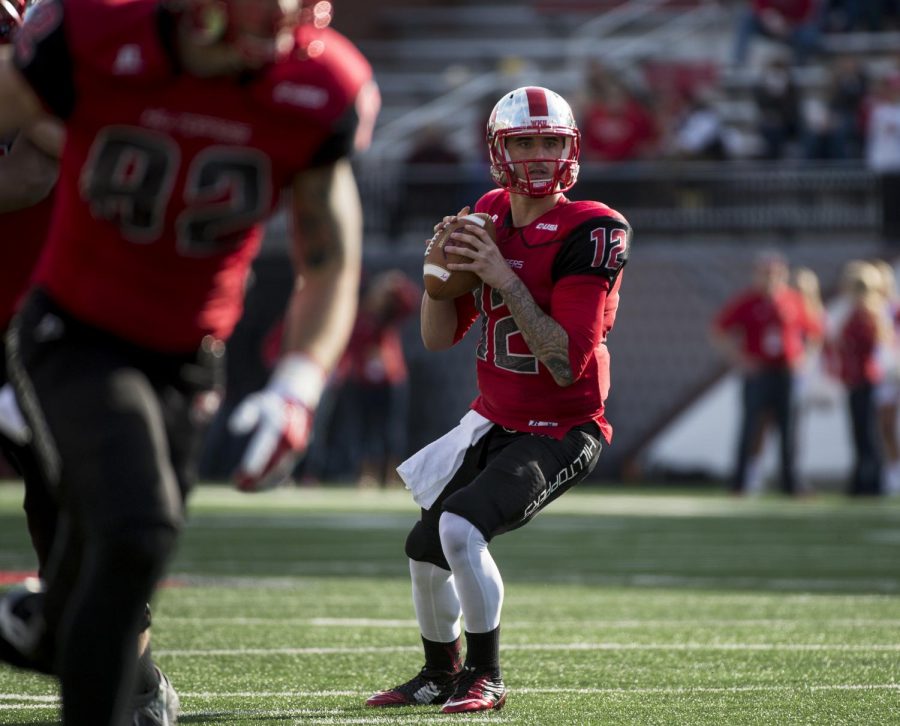 On Thursday, WKU Head Coach Jeff Brohm stressed the importance of sending his seniors out of Smith Stadium the right way – with a win. WKU did that and more as the Hilltoppers trounced UTSA 45-7 in their Senior Day matchup on Saturday to solidify bowl eligibility for the fourth-consecutive season.

The streak of four consecutive bowl-eligible seasons is the most in Conference USA. The win also marks the largest victory for the Hilltoppers in FBS conference play.

“Those (seniors) have achieved a lot,” Brohm said. “…They’ve brought this program to greater heights and greater levels and raised the level of play here. …To send them out with a victory like that, it means a lot.”

Redshirt senior quarterback Brandon Doughty ended his home career with another impressive performance, completing 26 of his 35 pass attempts for 346 yards and five touchdowns.

Doughty threw for 2,107 yards, 24 touchdowns and zero turnovers in six home games this season while completing 74.6 percent of his passes.

Senior wide receiver Willie McNeal hauled in seven catches for 105 yards and a touchdown, marking the third-career 100-yard receiving performance of his career.

With this win marking the third of a three-game win streak, Brohm said the team has bought into his playoff mentality.

The Hilltoppers began their first-half rout with a five-play, 74-yard drive with 12:46 left in the first quarter, capped by a 54-yard pitch-and-catch from Doughty to junior running back Leon Allen. Allen hauled in the short pass and streaked up the left sideline for the touchdown.

WKU extended its lead to 14-0 with 4:22 left in the first via a 47-yard touchdown pass from Doughty to Taylor after a stop-and-go route rendered his defender helpless.

After three-straight stalled drives for the Hilltoppers, Doughty continued his impressive first-half performance with a 67-yard touchdown pass to McNeal. Doughty went for it all on the first play of the drive and although the ball was tipped, fellow senior McNeal was in perfect position to haul it in and take it to the end zone.

The senior-to-senior touchdown pass and catch made the 2014 team the highest-scoring team in program history with one regular-season game to spare.

WKU ended the half with a four-play, 71-yard touchdown drive, capped off by a 13-yard lob over the middle to a wide-open Jared Dangerfield that extended the Hilltopper lead to 28-0.

The first-half shutout marked the first since Nov. 23, 2013 against Texas State for the Hilltoppers. WKU held the Roadrunners to just 2-of-11 on third and fourth down through two quarters.

The second half was much of the same for the Hilltoppers, as Doughty found Dangerfield, who leaped up to make the grab over a UTSA defender, for a 16-yard touchdown reception with 8:10 left in the third after two-straight stalled drives by the Roadrunners.

After a 34-yard field goal from WKU junior kicker Garrett Schwettman, the Roadrunners got their first points of the game on a 47-yard touchdown pass from freshman quarterback Dalton Sturm to freshman receiver Kenny Thomas Jr.

Nevertheless, the Hilltoppers would be on their way to victory as a two-yard touchdown run from redshirt senior fullback Demetrius Coley sealed the final score at 45-7. It was Coley’s first touchdown since scoring one as a tight end during his freshman year.

WKU now advances to the “championship game” – according to Brohm – next week when it travels to Huntington, West Virginia to face undefeated Marshall (11-0, 7-0 C-USA).

“You look for games like that, especially to knock of an undefeated team,” redshirt senior defensive back Cam Thomas said. “I don’t understand anyone who plays this game to say they’re not looking forward to the challenge. I feel like we have the guys to go out and complete the job.”