Lady Toppers prepare for No. 12 Louisville 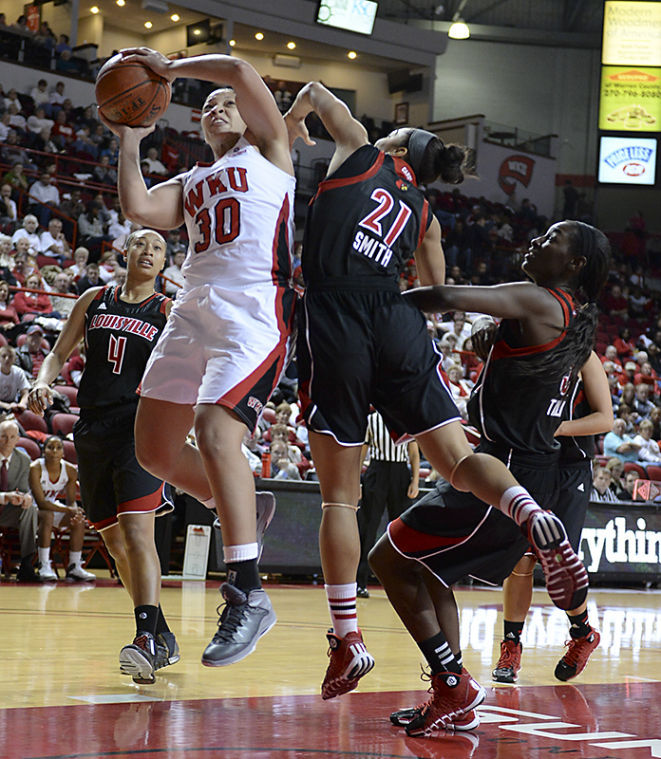 WKU women’s basketball coach Michelle Clark-Heard learned several things from her team over the course of the 2014 Preseason WNIT tournament, which ended with an 88-77 defeat at the hands of Mississippi State in the championship match on Sunday.

She’s confident those elements will carry over into Tuesday night’s game at No. 12 Louisville.

“The biggest thing was our resilience—our never-give-up attitude,” Heard said. “After (Sunday’s) loss and talking to the staff and some of the players, we have things to work on but we are in a position where we have gotten better.”

WKU (3-1) will play in Louisville for the first time since the 2006-07 season when it played the Cardinals at Freedom Hall. Louisville has defeated WKU in the last three games, including a 74-61 decision last year in Diddle Arena.

Louisville leads the all-time series 25-18, even though WKU has won 11 of the last 16 meetings.

Together these three Lady Toppers scored 59 of WKU’s 77 points in its first loss of the season on Sunday.  Gooch claimed the C-USA Women’s Basketball Player of the Week award after averaging 21.3 points and 10.3 rebounds in the tournament.

WKU is one of three universities in the state receiving votes in the NCAA AP poll, and the only one that does not currently rank in the top 25.  Kentucky leads that pack at No. 9 with Louisville at its heels at No. 12. WKU currently sits tied at No. 37 with UCLA, each receiving 4 votes.

“At the end of the day as coaches our job is to prepare them and get them ready,” Heard said. “Get them to understand that with this quick of a turn around, we have to leave Mississippi State behind and we need to move on a get ready to face Louisville.”

RELATED LINK: Lady Toppers can’t catch up to No. 4 Louisville in loss