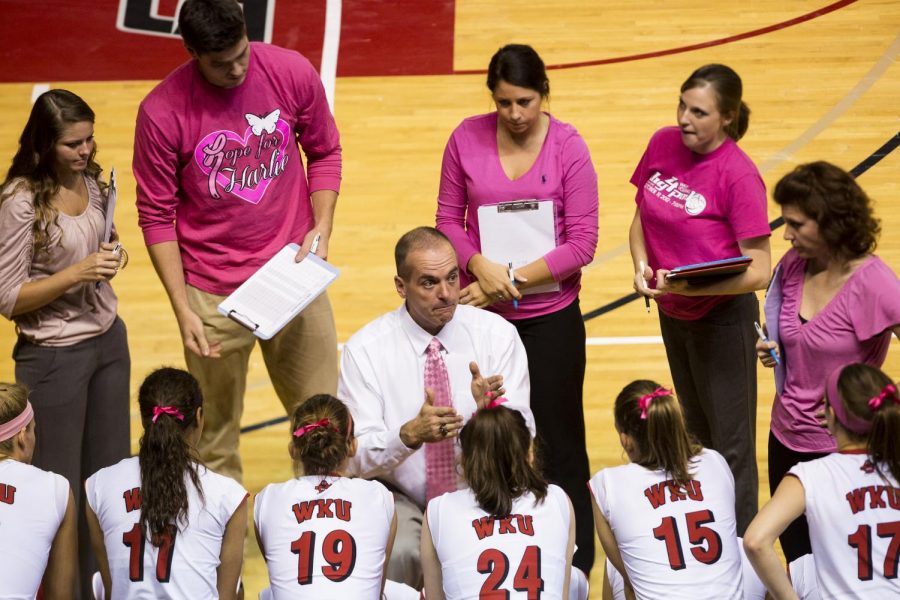 Head Coach Travis Hudson gives the volleyball team a talk during the game against Tennessee Tech on Tuesday. Brandon Carter/HERALD

WKU volleyball completed its regular-season road schedule this past weekend with wins over Southern Miss and Marshall on Friday and Sunday, respectively, to improve to 25-5 overall with a 13-1 clip in conference play.

“I was really quite happy with what we did this weekend,” Head Coach Travis Hudson said. “I think we played really hard and we are starting to bounce back — I uncharacteristically gave them three days off after UAB last week just to get their legs back under them and I think it gave them some of their energy back.”

Freshman outside hitter Alyssa Cavanaugh proved again to be one of the more dominant offensive freshmen in Conference USA on Friday night, notching 16 kills. Junior outside hitter Haley Bodway was right behind her at 15.

Freshman setter Jessica Lucas continued to show her importance both on the offensive and defensive side of the ball, notching 45 assists to help the Lady Toppers to a .308 hitting mark. She wasn’t done there — she secured a double-double with 17 digs on the evening.

Hudson’s team has recently been relying heavily on defense in a season that started off with an offensive bang.

“The face of our team has changed,” Hudson said. “If you look at what we did this weekend, we were led defensively, which I am so proud of because that really was an Achilles of our team early on this year. Now we are really relying on our team defensively.”

WKU mustered 69 digs on the evening, highlighted by a then-career-high 23 by sophomore defensive specialist Georgia O’Connell.

As the season draws to a close for Hudson and his team, it’s clear that he has found a way to use each player to their strength.

“It has been a very interesting year because, on one hand, we have always found a way to win, but on the other hand I don’t think we have had everyone playing well at the same time at any stretch, but I am very proud of them,” Hudson said.

Just when it looked like it was all said and done, the Lady Toppers found themselves struggling late in the fourth set. After leading 20-14, attack errors and Southern Miss blocks plagued WKU, leading to a 25-25 tie. However, consecutive kills from Bodway and Boyan sealed the deal at 27-25.

“Nothing has been easy for this team, all year long,” Hudson said. “Our kids played really hard this weekend, and we played really well at times, but if you followed the scores you would know, we had some really big leads that we squandered.”

Lucas didn’t miss a beat and notched another double-double, coming up with 12 digs and 39 assists to help her team notch 48 kills. Cavanaugh had 15 kills, followed by Boyan with 12.

O’Connell reset the career high in digs she set on Friday against Southern Miss with 25. At the net, WKU had 11 blocks, with Boyan notching six.

WKU got out to an early 5-1 lead in the first set. After five score ties, kills by Boyan and Cavanaugh sealed the win 25-23.

After an 8-0 WKU run in the second, four Cavanaugh kills and two Langenkamp blocks, it looked like it was smooth sailing for the Lady Toppers as they led 24-15. However, Marshall managed a 9-0 run to tie the score at 24-24. Bodway stepped up, though, dishing out a kill and assisting Boyan on a block for the win.

WKU has just two more games on the regular season, both of which take place in Diddle Arena this week. UTEP comes to WKU this Thursday for a match at 7 p.m., while Middle Tennessee closes out the Lady Toppers’ inaugural C-USA season on Saturday at 7 p.m.