Topper to Titan: Andrews’ rise from the Hill 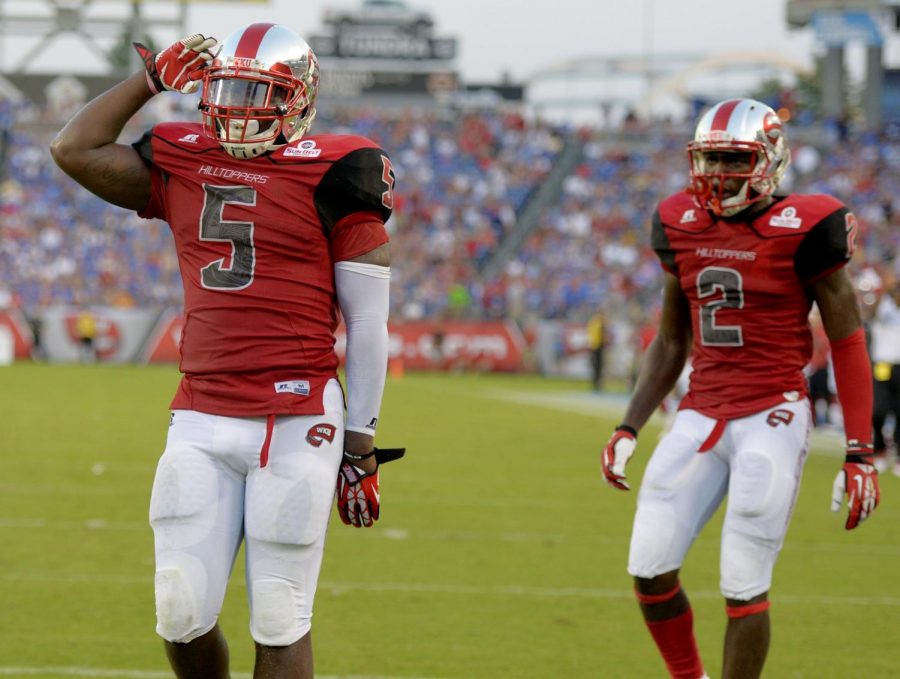 WKU senior running back Antonio Andrews salutes after scoring a touchdown in the second quarter against Kentucky.

Sitting in a hotel room on the eighth floor of the Millennium Maxwell House in Nashville are two rookies in the National Football League.

It’s the beginning of August; the start of the dreaded, yet anticipated training camp in the heat of the signature humid summer with the Tennessee Titans.

One of them is a heralded running back out of Washington. He’s the first running back taken by Tennessee in the 2014 NFL Draft in the second round, Bishop Sankey.

The other man isn’t familiar to Sankey and vice versa. Regionally, everyone knows his name, his accomplishments.

To Sankey, he’s the laid back, chill guy from Western Kentucky.

Antonio Andrews has heard that a lot since leaving WKU. Who is this guy from Western Kentucky? This guy is one of the nation’s leading rushers? People had heard the name, heard his stats, his story. But not many had seen ESPN3 webcasts of WKU football games. Maybe once or twice the network would drop his name and his school, but it always was underwhelmed by the attention of high-profile athletes.

That guy from Western Kentucky wouldn’t have it any other way to begin his professional football career.

Antonio is a homebody. In his mind, he wanted to be a Titan during the entire process. He understood the nature of the business, but wearing two-toned blue was all he envisioned.

Tennessee is home. The Titans are Sharon Andrews’ favorite NFL team. She smiles at the thought of Doogie playing for the home team. Doogie is what Olan and Sharon Andrews began calling Antonio when he was just 3 years old.

Olan knew his two sons, Olan Jr. and Antonio, were special when they began playing little league sports in Enterprise, Alabama. Doogie had that spark and intelligence that exceed the other kids at a young age. The Andrews’ picked up and moved to Fort Campbell when Olan was stationed there while Doogie was in the fifth grade.

He went on to excel at Fort Campbell High School, winning Kentucky’s 2009 Mr. Football honor, on top of winning two state championships as a quarterback. He was invited to Nashville to appear on former Titans coach Jeff Fisher’s weekly television show for the recognition of his honors.

Playing in the NFL was a dream and the opportunity to play for one of 32 teams would fulfill it. The reality of playing in the NFL for the team just one hour down the road made the dream worth fulfilling.

Opportunity knocked on May 10, the final day of the NFL Draft. Some experts and analysts predicted Andrews to go in the later rounds; some had him following the same free agency route as the last WKU running back to enter the league, Bobby Rainey.

The Andrews held a draft party at the Holiday Inn in Enterprise awaiting that fulfillment. Round by round, individuals not named Antonio Andrews were selected off the board.

“I was mad, but I had to be there to support him and was like, ‘it’s okay,’” Sharon said. “But I know it hurt him. I read a lot of blogs on the internet so I thought if he didn’t make it here, he might make it later on.”

His parents weren’t with him when his agent called. The Titans were the first of many teams seeking to pick Andrews up as a free agent.

“He called me and asked, ‘Do you like Texas or Tennessee?’,” Sharon said. “I said of course Tennessee. And that’s when they said they were going to sign him as a free agent. I went crazy.”

A study by the NFL Players Association shows that of the 100,000 high school seniors who play football every year, only 215 make an NFL roster — only 0.002 percent.

Andrews joined the Tennessee Titans as one of six running backs on the roster heading into training camp. When the team’s depth chart was announced during the preseason, he was listed as fifth on the list. His chances of staying with the team were slim.

“We noticed his athletic talent and his football skills and we really wanted to see what kind of football intelligence he had,” running backs coach Sylvester Croom said during the early stages of training camp. “We researched his character and thought he was a solid individual and felt like he had a chance to compete and make our team. He runs hard and he’s picked up the offense pretty well. Now it’s just a chance — and it will happen — for him to show us what he can do in these next preseason games.”

It’s Week One of the NFL preseason. The bottom fell out of the Nashville sky over LP Field on Aug. 9 when the Titans hosted the Green Bay Packers. It rained the entire game, and Andrews only carried the ball twice in his first ever game in an NFL jersey.

“There were a lot of mixed emotions going on — a lot of adrenaline,” Andrews said in the locker room after the game. “I didn’t play as much as I wanted to, but you know how that goes. Can’t hang your hat on it too much other than there’s many other preseason games.”

The following week in New Orleans against the Saints, it got worse with just three carries for -1 yard.

But good things come to those who wait.

In a trip to Atlanta, Andrews finally broke out of his shell with 56 yards on three carries, including a 47-yard run with less than a minute remaining.

“I was happy to see that,” Head Coach Ken Whisenhunt said the following day. “It was nice to see him break off that long one and then get tackled. I wish he had been able to take it to the house. (laughing) I’m just kidding on Antonio. It was good to see that. He’s had a nice camp for us. He’s gotten better and it was good to see him get a chance last night.”

Olan and Sharon Andrews are relaxing on a couch at The Icon in the Gulch in downtown Nashville. This is where Antonio lives for the time being.

He won’t stay here long if Tennessee decides to release him following the final preseason game due to the team’s obligation to cut its roster down to 53.

They hope they can return to this same place soon to visit their son at home. Two months prior, Olan was relocated to Fort Irwin in California. They’ve flown back home to finally see their son play for the Titans in person because it may be the last time.

They’re sitting with the Baisch family in the first row of section 137 of LP Field. Larry and Karen Baisch and the Andrews family became inseparable when Antonio and Nick Baisch joined the WKU football team in their freshman seasons. To this day, they hardly miss a game together.

“We have told our kids that what God gives you, nobody can take it away,” Sharon said. “I think that plays a big part for him. If he gets cut, there’ll be an opportunity somewhere.”

Against the Minnesota Vikings on Aug. 28, Andrews rushed for 76 yards on 12 carries, making his case for a continued opportunity in Nashville.

“This is the one I’ve been waiting for,” Andrews said. “I’ve taken advantage of all my opportunities given. What God gave me can’t no man take from me. I left it all on the field. Whatever happens, happens.”

Andrews was cut from the Tennessee Titans less than 24 hours later. The franchise wanted to keep him on the practice squad so no other team could pick him up, but they could do nothing if another team wished to put him on its 53-man active roster.

Now came the waiting game for the phone call from his agent, whether it was from another team or from the Titans to remain on their practice squad.

He waited — no phone calls.

Finally the call came to stay home. Tennessee got its wish by keeping Andrews on the practice squad.

The Titans prepare for the regular season opener as he sits at his new locker with a nameplate on the way. During the preseason, he held a temporary locker space in the middle of the room alongside other free agents. Now, he has space and identity to call home.

“It’s crazy, the first day I was in here seeing so many guys and rookies doing all those mandatory meetings and looking around the locker room and there’s just a handful of us left, even though I’m on the practice squad,” Andrews said. “Just to be one of the one’s that stuck around feels good.”

At this point of a story, the reader expects a proper conclusion. But that doesn’t happen when the subject is still writing his own script. There’s not a selfish goal for fame in the NFL for Antonio Andrews. For him, success isn’t defined by records, or touchdowns, or how much money he cashes in from the league.

Through all the work of his life playing a game, his biggest blessing has only existed for a year.

Antonio made the one-hour trip from Nashville to Bowling Green every day during training camp and continues to make the trek every Monday and Tuesday.

“You can tell (Tayte) is his namesake,” Nick Baisch said. “He wants to give everything and every opportunity to his son. I’ll never forget his face when he told me about Tayte. It was pure joy on his face. No record, no touchdown, no anything, I’ve never seen that smile on his face.”

It was just a few weeks ago when Baisch spoke with Andrews over the phone on his routine trip to Bowling Green. He had just gotten a call from the Buffalo Bills to join their active roster and was to be on a plane heading to New York several hours later.

He was on the way to say goodbye to Tayte.

Then, Tennessee made the counter offer to promote him to the active roster.

“You always have to choose the home team,” Andrews told Nashville media the day he was activated. “I’m right here next to everything. I’m here close to my son, too. It’s a dream come true, staying right here in Nashville, staying close to home so it’s a good feeling to keep those colors on.”

Andrews has yet to play a down in an official regular season game. That could change with the Titans leaning toward other options with a struggling 2-6 record halfway through the season.

Andrews’ story remains unfinished because it’s just begun. The not-for-long mantra of the NFL could still hold true for the former WKU great. But he has the opportunity and he has his son.

That’s all he wants.

“His dream was to play in the NFL,” Baisch said. “He’s getting NFL paychecks and he hasn’t played a down in a regular season game. But he’s a family guy. He has personal dreams, and he has family dreams. I can’t tell you if he feels like he’s made it or not, but everyone is proud of him.”