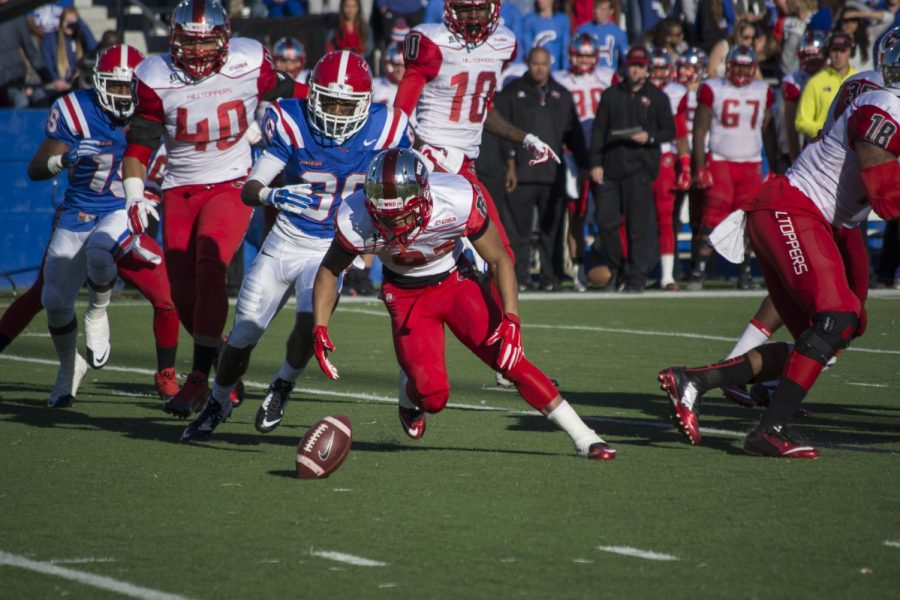 Redshirt freshman receiver Kylen Towner fumbles the ball on a kickoff against Louisiana Tech on Nov. 1. The Hilltoppers dropped a 59-10 decision to the Bulldogs.

My how the tables have turned.

Just one week after WKU put up a school FBS record 66 points, the offense only scores 10.

Just one week after redshirt senior quarterback Brandon Doughty claims the single-season record for passing yards and touchdowns, he matches his season interception total in one game.

Just one week after a video-game showing full of optimism, someone turned on the All-Madden option and shut WKU down in a 59-10 trainwreck at Louisiana Tech.

Sounds like Halloween stayed an extra day in Louisiana.

What transpired on the field Saturday was an indication that things are pretty bad when WKU’s offense isn’t productive. The Hilltopper offense ranked fifth in the nation prior to meeting with the Bulldogs, but they only mustered up 297 yards in the loss.

“We know now that when we don’t play well it’s not going to be pretty,” Head Coach Jeff Brohm said. “We can’t have those lulls on offense. We know that we have to perform at a high level. We know all of our players have to play well and play tough. Defensively, we just have to keep trying to improve. Right now, statistics speak for themselves – we aren’t a good defensive team.”

Yeah, the defense was business as usual – 507 yards allowed and 59 points. Unfortunately, that’s the way the defense is going to be every week. They gave up 42 points to UAB, followed by 51 points versus Old Dominion, then that 59 mark Saturday. So if there’s any hope for this team, the answer certainly isn’t in that defense.

If you’re like me and have ever wondered what WKU would look like if one side of the ball had a completely uncharacteristic game, then wish granted. The Hilltoppers finally faced one of the conference’s best defenses and that’s what happens.

LA Tech defensive coordinator Manny Diaz threw blitzes across the field from angles I didn’t think were possible. Receivers couldn’t get space from defenders off of press coverages either. Mix that together and you get an offensive nightmare. So now that they’ve lived and learned by that fire, they get another quick dose of the same medicine with UTEP.

“They’re very good on defense, very similar to the last defense we played,” Brohm said. “They’ll press you up quite a bit, give you a lot of blitz looks and come at you from a lot of different angles so it’ll be good to see how much we learned and how we can get better.”

You have to wonder about the psyche of a team that just got road-roasted. Brohm even said Doughty lost confidence after a few rough hits and pick after pick. Bouncing back is hard, and this is a young team that doesn’t have the experience – and probably the maturity level – to throw an awful game behind them and completely forget about it. Instead, what they have to look forward to is three straight home games, all of which are winnable.

“Whether you lose by one point or lose like we did the other day, it is what it is,” redshirt senior offensive lineman Cameron Clemmons said. “It’s part of the business. You get knocked down sometimes but whether we win or lose, we’re coming back to work every week so we’ll be fine.”

WKU has the chance to keep the Miners another week away from bowl contention with a win on Saturday. Bowl hopes for the Hilltoppers aren’t out of the question just yet either, but they’ll have to turn that table back in their favor quickly.

We’ve already seen the difference one week of play can make so it’s not impossible, but there’s not a lot of time left to find out.