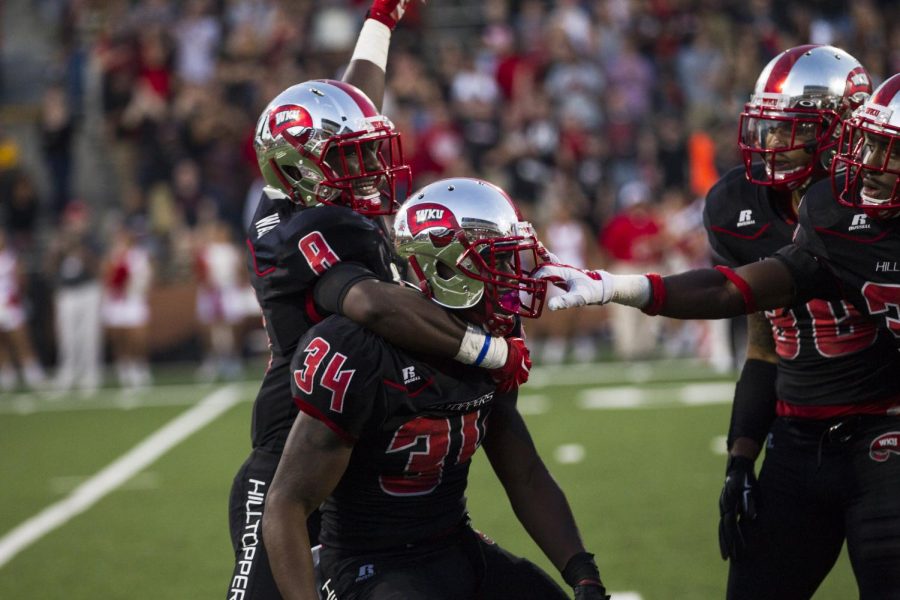 Sophomore linebacker Drew Davis (34) is mobbed by teammates, including sophomore defensive back Marcus Ward (8), after making a huge hit on an Old Dominion kick returner during the second half of WKU's Oct. 25 game against the Monarchs. Davis had two tackles as the Hilltoppers defeated ODU 66-51. Brandon Carter/HERALD

There’s a sign that hangs in Marcus Ward’s garage in Birmingham, Alabama that reminds him where not to park his car.

It’s a sign specially titled for his father, Darryl, that states “Marine Corps Parking Only.”

The Hilltoppers face Army on Saturday and will represent veterans across all military academies for Military Appreciation Day. Darryl will be in attendance as a Marine veteran, while also cheering on his son.

“He’ll love the atmosphere,” Marcus said. “He’s already talked to me about it on the phone this week about how many people he knows coming in. He’ll probably make some connections and might even run into some he knows.”

Marcus, a 6-foot-3-inch sophomore safety, was born five years after his father left the United States Marine Corps Reserves in 1990, where he served for six years as a Military Operational Specialty and infantry reserve.

“I’m always excited about when they honor veterans at any venue because I don’t think this country can recognize veterans enough,” Darryl said. “As the saying goes, ‘All gave, but some gave all.’ There’s been sacrifices from our military since this country’s inception and it is what it is today in terms of freedom because of what has been given to us from our military.”

President Gary Ransdell will tandem jump with The Golden Knights onto the practice field next to Smith Stadium to present the game ball leading up to the coin toss, following a special aerial performance by the group celebrating their 50th year as an organization.

The WKU ROTC will also unveil a large American flag across the field during the national anthem. At the end of the first quarter, the university will unveil a permanent MIA-POW seat to raise awareness for American Prisoners of War-Missing in Action, becoming the first university in Kentucky to unveil the honorary chair in their football stadium.

Darryl isn’t the only military influence on Marcus’ life. Darryl’s younger brother, Fredrick, also served in the Marine Corps for 10 years, along with several cousins who served time with the Army. Marcus notes his dad’s continuous passion for the military and credits a portion of that to his disciplined upbringing.

“He’s passionate about it,” Marcus said. “He doesn’t really try to instill all those military disciplines, but you can definitely tell it and hear it in his voice sometimes because he’s a pretty stout and disciplined guy. He just tries to be a parent, but you can feel it sometimes.”