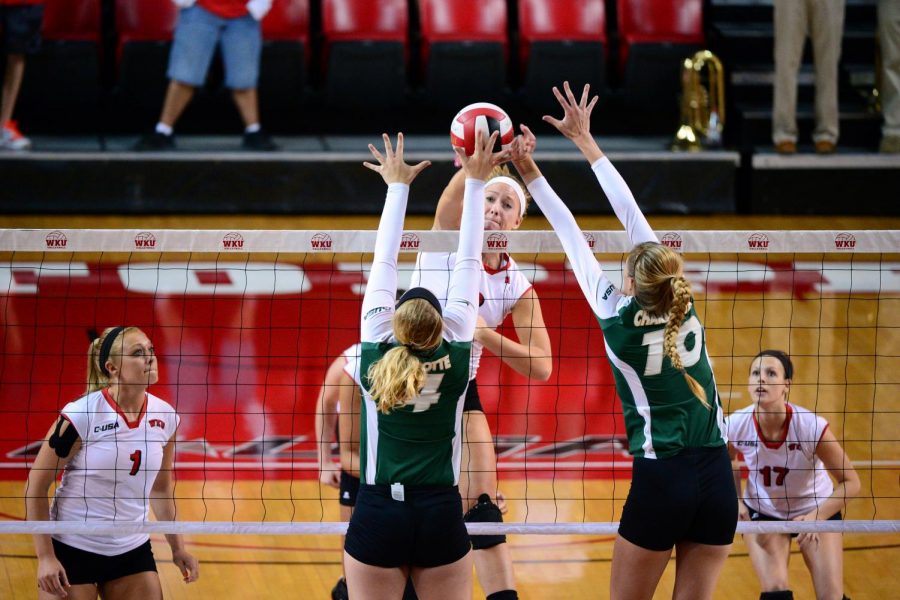 In its first year in the league, WKU Volleyball is the Conference USA co-champion after sweeping Middle Tennessee (25-18, 25-16, 25-18) Saturday night to wrap up the regular season.  The Lady Toppers finished with a 27-5 overall and 15-1 conference record to share the C-USA champion title with UTSA.

Overall, Boyan and Pajakowski hold a 118-19 record and 62-3 record against conference opponents.

The win over the Blue Raiders marks the first time WKU has finished the season with an undefeated record in Diddle Arena since 2005.

Freshman outside hitter Alyssa Cavanaugh provided potency once again to the Lady Toppers with 20 kills on the evening with a .500 hitting percentage.  Junior Haley Bodway claimed the next highest total for WKU with 10.

Freshman setter Jessica Lucas proved to be vital on both sides of the ball, dishing out 41 of WKU’s 47 assists and also nabbing the second highest dig total on the evening with nine.

Boyan came up huge on her last night in Diddle arena.   The middle hitter contributed seven kills with a .375 hitting percentage and played a part in six of WKU’s eight blocks.

WKU moves on to the Conference USA Tournament in Hattiesburg, Mississippi next Friday, with its opponent to be determined.