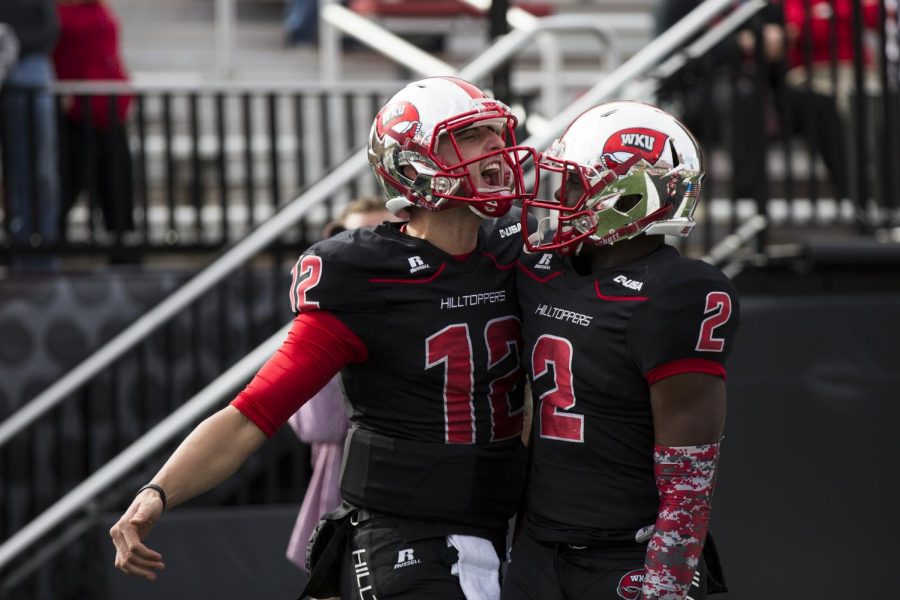 Redshirt senior quarterback Brandon Doughty (12) celebrates with sophomore wide receiver Taywan Taylor (2) after rushing for a 15-yard touchdown during the first half of the WKU-Army game on Nov. 15. The Hiltoppers led the Black Knights 24-10 at the half. Brandon Carter/HERALD

It’s the first time since Nov. 23 of last season against Texas State that the Hilltoppers have shut out their opponent in the first half.

Brandon Doughty is 14 of 29 for 253 yards and four touchdowns to different receivers.

Taywan Taylor has three catches for 73 yards. Leon Allen has 65 yards on three receptions and Willie McNeal has caught two passes for 75 yards and a touchdown.

The WKU defense has shut down the Roadrunners to just 63 yards of offense and 1-of-8 on third down, 1-of-3 on fourth down.

WKU opened the scoring route when Doughty threw a short toss over the middle to Leon Allen who broke a tackle and scampered down the left sideline for a 54-yard score to open the game.

Doughty found Taywan Taylor wide open on a stop-and-go route down the right sideline for a 47-yard touchdown pass to make it 14-0 with 4:22 remaining in the first quarter.

After a slow start to the second quarter, the Hilltoppers offense found life again when Doughty connected with McNeal for a 67-yard touchdown pass that was tipped by cornerback Bennett Okotcha. The ball fell into McNeal’s hands, who jogged into the endzone.

WKU took advantage of another failed fourth down attempt by UTSA and scored scored on a four-play drive capped by a 13-yard touchdown reception from Doughty to Jared Dangerfield to go up 28-0.

A win for the Hilltoppers today would make the team bowl eligible for the fourth-straight season.