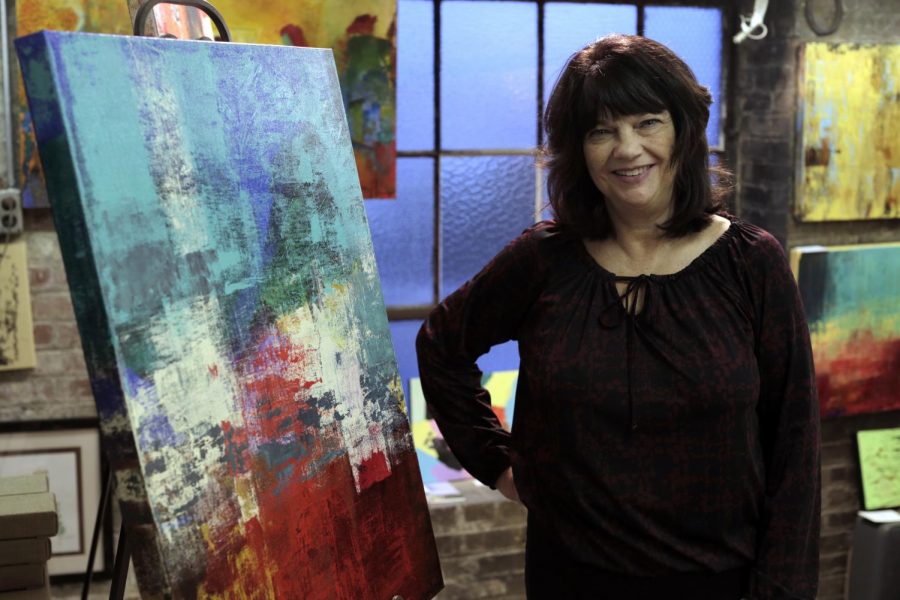 Myra Dwyer poses with her paintings in the Pushin Building Artist Studio. Dwyer has been painting for nine years and is co-manager of the studio alongside Angie Alexieff . Bria Granville/HERALD

Being part of a family can often mean sharing meals together, living under the same roof or celebrating holidays with one another. But for a small handful of artists in the Bowling Green community, family is about coming together in a homely apartment space to make art alongside one another.

Pushin Building Artist Studio is located in a small apartment space above Corsair’s Distillery at 400 E. Main St. Pushin distinguishes itself from the fact that it is a working studio and not a gallery. As a working studio, as opposed to a gallery, Pushin is only open to the public six times a year, and those are typically for the Bowling Green Gallery Hops. Pushin was started 10 years ago by Angie Alexieff and is now co-managed by Alexieff and Myra Dwyer.

In total, there are currently seven artists who have a working space at Pushin.

Dwyer said that, often, people hear of openings in the space by word of mouth or other mutual connections. She also said they don’t really advertise when there’s an open space and feels that, ultimately, the right people will find their way there.

Interviews are often conducted for background information and such, but it all comes down to if they’re a good fit with the other artists.

“It has to be a good fit with personalities. We don’t mind if everyone does different things, but we all do need to get along,” Dwyer said.

Dwyer, who largely specializes in abstract art, said that having seven artists under one roof can make for differing creative views and techniques. However, she said that despite their different mediums and art styles, the studio members have had tendencies to overlap in their artwork.

“Sometimes we’ll all end up painting in the same color and we don’t even know it. We’re all not even consciously thinking about, but it’s very interesting to see,” Dwyer said.

It’s this type of connection that leaves Dwyer with the impression that everyone in the studio acts as a sort of weird family unit that always looks out for each other, and she’s not alone in this thinking.

Jack LeSieur also said that Pushin has provided him a safe place with warm people. LeSieur, an artist at Pushin,  described his work as more “folksy” in nature.

LeSieur said that he got involved with Pushin because of some personal issues he was dealing with at the time. He needed a place to relax and express his creativity. He recalled first coming to the studio as an amateur artist with no formal training, but he found everyone there was very willing to aid him in his endeavors.

“I found everyone at the studio to be extremely kind, welcoming and more than willing to help me develop as an artist,” LeSieur said.

Laura McGee, a silk artist and department head of modern languages at WKU, also works within the walls of Pushin. McGee shares the same sentiments of Dwyer and LeSieur. The studio also provides her a space to express herself.

“I wanted a space and a community to do my art in,” McGee said.

McGee reflected on how the Pushin artists will often eat and paint together either on Wednesday or Sunday evenings. McGee sees her fellow artists as a positive influence that always encourages her to show up to the studio and work.

Dwyer said the studio truly gives her a sense of inspiration for her artwork. It’s a feeling she said was hard to replicate anywhere else. She attributed her heightened inspiration and production of her artwork to the other artists at Pushin.

“I paint more because of the other artists. If I was home painting by myself, I don’t think I would paint as much,” Dwyer said.

She encouraged any aspiring artist to find a group of others to work alongside with to see how it will move the artist forward in work critiques and encouragements.

Pushin Artist Studio is home to aforementioned artists as well as: Cindy Houston, Melissa Paschal and Emily Hendrickson. Pushin will be open to the public on Dec. 5 during the Bowling Green Gallery Hop.