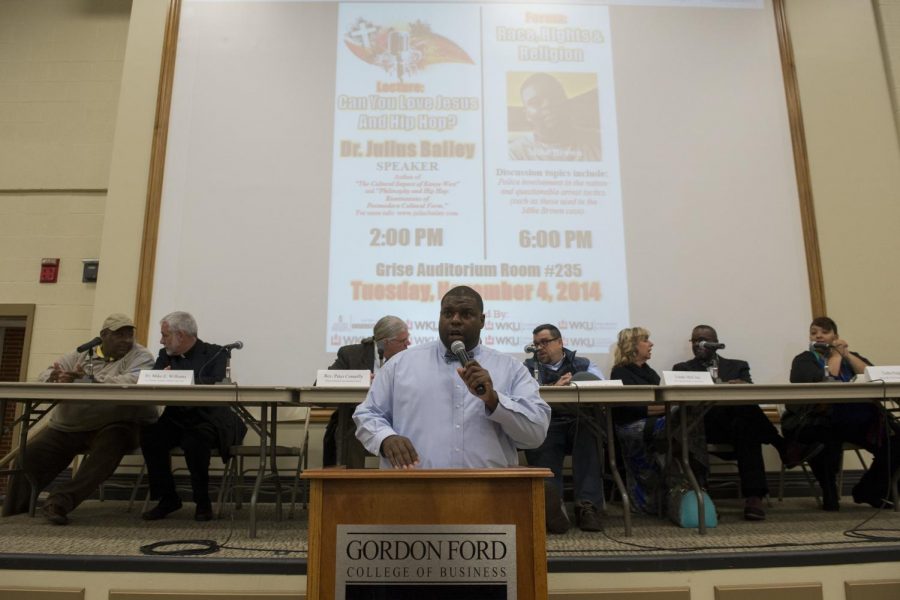 WKU graduate Barrett Wright introduce the panelist for the nights discussions on Race, Rights, and Religion on Tuesday night Nov. 04, 2014 in Bowling Green, Ky at Grise Hall. Discussion topics included about police involvement in the nation and questionable arrest, such as those used in the Mike Brown case.

The perception of race in the judicial system in America weighed heavy on the minds of several students, faculty and members of the community during a discussion about social fairness on Tuesday.

About 60 people in Grise Auditorium attended a forum titled “Race, Rights and Religion.”

Scottsville graduate student Barrett Wright organized the forum. The religious studies major said he organized the event out of his passion for social justice.

“I feel it’s my duty to try to create atmospheres for people to ask questions about it and even try to make a step towards the problems in America,” Wright said.

The forum consisted of eight panelists who discussed the following two questions: “Is there a problem with African Americans and the legal system in America, if so what is it?” and “What can we do about it and what role does religion play?”

Wright said coming up with questions was a difficult task.

“There is a problem in America with justice and I wanted the panelists to look at that,” Wright said.

The eight panelists included Linda McCray representing the Bowling Green Human Rights Commission, Tasha Paige representing the Save My City Foundation and Julius Bailey, the author of “The Cultural Impact of Kanye West.”

Panelists agreed racism is an ongoing problem in America.

Paige said she believes there is a problem within the police departments across America.

“Ferguson kind of pulled the veil back that we are now dealing with police officers who want to be the judge, jury and the prosecutor now,” Paige said.

Paige said one way to battle the racism in America is through religion.

“Ultimately, I believe we are dealing with the heart of man, and who can change the heart, but God,” Paige said.

McCray said she agrees racism is a widespread problem and is even alive in Bowling Green.

“I don’t think we can simply pray it away,” McCray said. “I think we have to be socially active with the involvement in politics, the legal process, the educational system within our communities and churches, but we have to be involved. We see an injustice done, so we need to speak up.”

Wright said he chose the panelists because he felt like they had something to say about the issue of race in America and its effects.

One student said she advocates for a more positive movement when wanting to move forward with the issue of racism.

“I don’t want to join a fight against racism, but a fight for equality,” she said.

McCray responded by saying that in order to talk about equality, people must acknowledge the existence of racism.

“While I respect your wish to be positive, I know that it is not always possible when there is some realities where that isn’t always the case,” she said.

McCray said talking about racism is often avoided because of the awkwardness surrounding the issue, but it needs to be done.

“There are going to be things that we don’t want to face, but they still have to be faced,” she said.

Wright said he wanted to host the event on WKU’s campus because colleges are often a way to engage young adults in social activism.

“Most of your movements in America, especially when it comes to power movements, civil movements and one that deals with black people, many of them have root on college campuses,” he said. “A lot of revolts, revolutions, marches have spurred or maybe came out of movements from universities.”