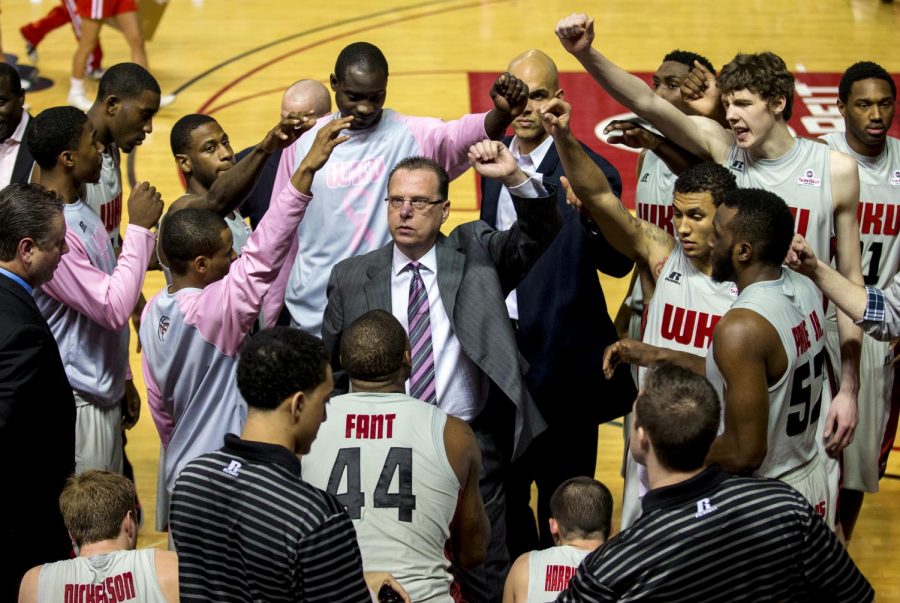 WKU's Head Coach Ray Harper (center) leads the Toppers in a cheer during a timeout in the second half of WKUÕs 68-64 victory over Texas State on Saturday, Feb. 1, at Diddle Arena. (Mike Clark/HERALD)

The WKU men’s’ basketball announced Wednesday the signing of three recruits for the 2015-16 season.

Edmond is the lone JUCO transfer as he currently plays at College of Southern Idaho. Edmond averaged a team-high 18 points and 6.2 rebounds per game as a freshman in 2013-14. He was also named a National Junior College Athletic Association (NJCAA) second-team All-American after the season and led the Golden Eagles to a 27-5 record.

“Fredrick is a special player and can be a difference-maker,” Head coach Ray Harper said. “He is a guy who could put the uniform on and get 20 points any given night, and he could do it a lot of different ways. He is physical, and he finishes with contact as well as anyone I have ever coached. He is extremely tough to guard, and he poses many different challenges for a defense.”

Hunter attends Houston High School, where he averaged 24 points and eight rebounds per game as a junior last season.

“Marlon is very well-rounded and can do a lot of different things,” Harper said. “He led a very challenging summer league in steals, and he really gets after it on the defensive end. He has a tremendous basketball IQ and a real feel for the game. He shows a lot of promise at the two-guard position.”

McNeal is a senior at South Side High School, where he scored 19.3 points and four rebounds as a junior in 2013-14 and helped South Side to a Class AA state championship.

“Chris is very explosive and sees the floor very well,” Harper said. “He is a great passer and can score, and he can break people down off the dribble. If I had to compare him with someone who played at WKU, I would say his game is similar to Tyrone Brazelton’s.”

Both Hunter and McNeal are rated three star recruits on Rivals.com and Scout.com.