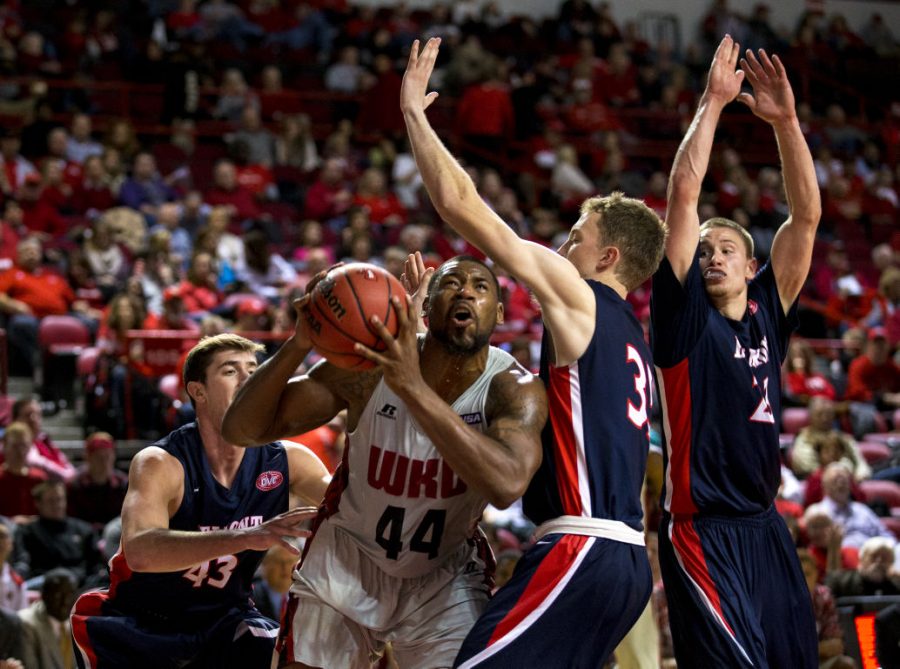 For the first time since 1986, the Hilltoppers took the stage on the most prestigious of courts, and senior forward George Fant stole the show.

Fant led the Hilltoppers (2-3) to a 62-59 win against Saint Joseph’s (3-3) at Madison Square Garden in the final game of the preseason NIT Tip-Off event on Thursday.

Fant finished with 17 points and a career-high 15 rebounds to go along with three assists, which tied a career-high. He shot 6-of-11 from the field and was 5-of-6 from the free-throw line. Prior to Thursday’s game, Fant had a combined 24 points in four games.

“George was George tonight,” Head Coach Ray Harper said on the Hilltopper IMG Sports Network following the game. “If he can continue to do that the rest of the year, we are going to be fine. It was hard to take George out tonight. If he had not gotten into a little bit of foul trouble, he may have gotten 40 minutes tonight.”

Fant drew a key charge with 1:27 to play with the game tied at 56. Fant then tipped in a WKU miss with 45 seconds remaining on the other end to give the Hilltoppers the lead.

Some timely free-throw shooting from senior guard T.J. Price allowed for WKU to hold onto the lead after that. Saint Joseph’s then clanked a desperation three-pointer with five seconds remaining, sealing the win for WKU.

“I’m happy for those kids because they’ve been competing,” Harper said on Hilltopper IMG Sports Network. “They have been playing hard enough, and they needed something good to happen. We just always haven’t made great decisions in that last three-to-four minute time period. We were in another one of those again tonight.”

WKU’s 75 percent free-throw clip and a 61 percent mark from inside the arc made up for the Hilltoppers’ struggles from three-point range. WKU was 3-of-22 from distance as sophomore guard Chris Harrison-Docks and Price were a combined 2-of-16 from downtown.

WKU also had success rebounding and shooting inside the paint. The Hilltoppers led the St. Joe’s in both categories, with nine more rebounds and six more points inside.

“We didn’t have a lot of key ones (turnovers) late,” Harper said on Hilltopper IMG Sports Network. “Some of them came from rushing things but for the most part, I thought we did a really good job.”

The game started slow for both teams as the two were a combined 1-for-12 in the first five minutes. Fant began taking control early as he got all of his three assists in the first half, leading WKU to a 31-24 halftime lead.

Saint Joseph’s responded with a 9-2 run to take a 54-52 lead with 2:46 remaining in the game but six-straight points by WKU helped it stay in front.

The game marked the first time since 1986 the Hilltoppers played in Madison Square Garden. WKU now holds a 19-21 record in the historic venue.

“I’m glad our kids got the opportunity to play in Madison Square Garden,” Harper said on Hilltopper IMG Sports Network. “Now we need a day off.”

WKU’s next game will be played Wednesday against Bowling Green State at Diddle Arena at 7 p.m.