Movin’ on Up: Students adjust to life in campus apartments 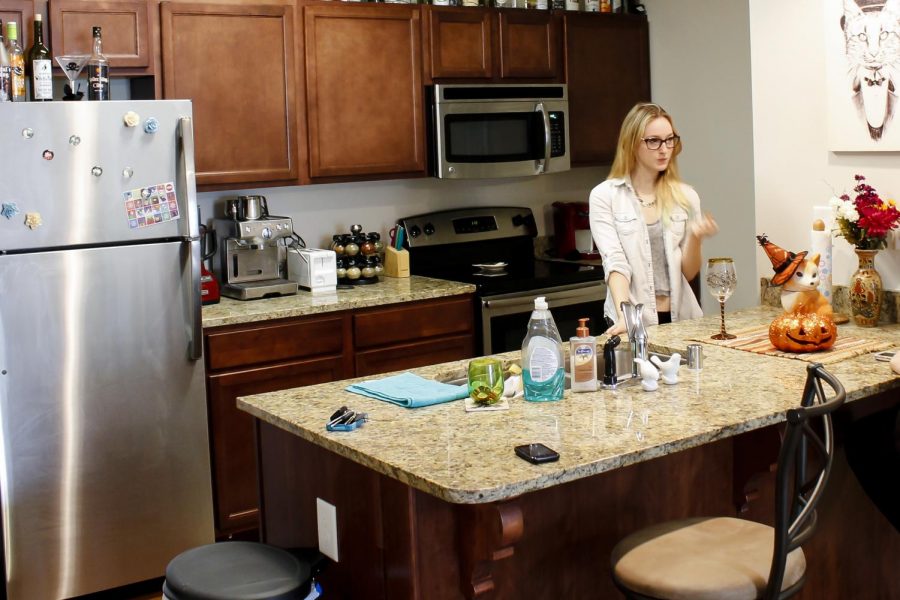 Owensboro junior Courtney Hamilton and Louisville junior Emily Woodruff are residents in the newly constructed Kentucky Street Apartments owned by WKU. The apartments feature a kitchen, bedrooms, a washer and dryer, a bathroom and a living room. Jennifer King/HERALD

Ellinor Haag and Michaela Bordeianu, both juniors from Sweden, have come a long way from their dorm in Bemis Lawrence Hall.

The two friends are currently living together in the WKU apartments on 1355 Kentucky St. and they’re enjoying the independence.

“What I like most is the kitchen,” Bordeianu said. “Me and Ellinor can cook at the same time and not be bothered by each other. It’s a huge difference.”

Minnette Ellis, coordinator for Apartments and Living Learning Communities, said the waiting list for the apartments reopened for students on Oct. 1.

Students are required to have more than 60 hours in order to live in the apartments.

This will be Haag and Bordeianu’s third year rooming together. Their first year was in Bemis and their second year was in Northeast Hall. Haag said the room they shared at Bemis was above a trash container and that a garbage truck would wake them up when it picked up trash every Monday, Wednesday and Friday morning at 5 a.m.

“My first year wasn’t really the greatest experience, but in Northeast it was really good,” Haag said.

Haag enjoyed having her own bathroom in Northeast Hall. She is on the golf team and also enjoyed that there were more athletes to hang out with in that dorm.

However, the room was still small, Bordeianu said. She described their shared apartment as more comfortable.

“The floor plan of it is amazing because there’s two big bedrooms and we both have a bathroom, so it’s not even like we have to share our bathroom,” Bordeianu said.

Haag likes the extra kitchen room in her apartment unit for cooking her favorite foods, like tacos, spaghetti, salads and Swedish dishes. The extra space is also nice, she said.

“Even though I love living with Michaela, when you’re 21 years old, you kinda want your own space,” Haag said.

In order to get a room in the apartment complex, one must be placed on a waiting list. Ellis said the previous apartment waiting list had about 150 students. Students can apply online. How quickly they apply determines their position on the list.

“We looked at the system of people who lived with us in housing, and then so if they didn’t live with the housing, then obviously they came from off campus,” she said.

The WKU apartments on Kentucky Street are considered to be on campus. However, the apartment policies might be more lenient than students living in residence halls are used to.

“On the campus, you can not have alcohol in the residence halls and if you live in the apartments, you have to be 21,” Ellis said.

Students have a little more freedom for visitations from friends as well.

Guests must call the resident they wish to visit in order to get access into the building. Ellis said each apartment unit is equipped with a video screen allowing residents to view guests outside the building through a camera and let them in with the press of a button.

Haag said she controls who comes into her apartment.

“There’s no rules that we need to like, check them in or check them out,” Haag said.

The new apartments feature common areas, such as a study room and gym. Although Haag is satisfied with the gym, she said it lacks free weights.

“The variety of gym accessories is too small,” he said.