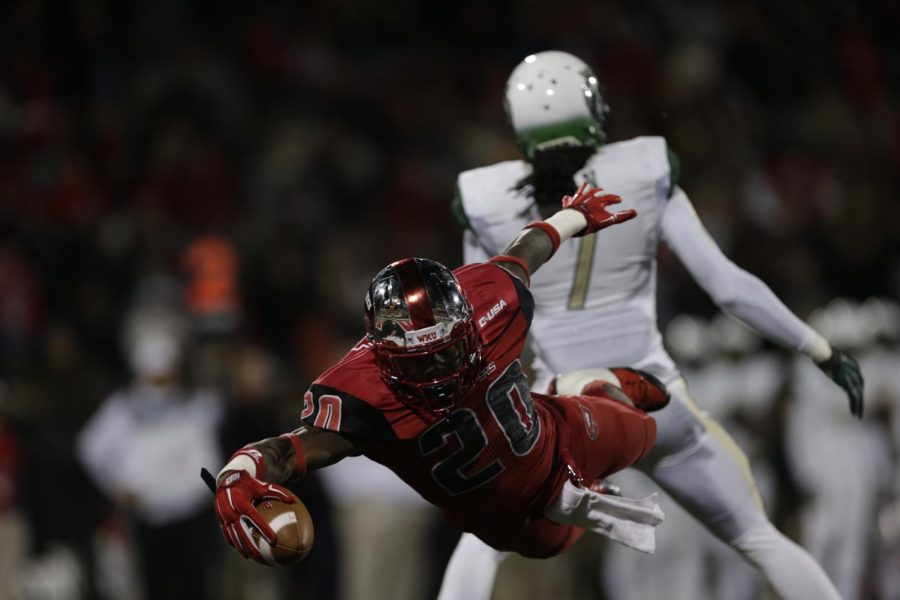 WKU redshirt sophomore running back Anthony Wales (20) makes a superman dive into the end zone during the first half against Conference USA opponent University of Alabama-Birmingham (UAB) Saturday October 4, 2014 at Smith Stadium in Bowling Green, Ky. Despite rushing for 138 yards and three scores Wales could not propel the Hilltoppers to victory in a disappointing 42-39 loss that saw the WKU defense allow 591 yards on offense, a season high. Luke Franke/HERALD

The Blazers’ offense took over at its own 28 with 6:24 left in the first half and marched all the way to the WKU 11-yard with under a minute to play.

An illegal formation penalty on UAB pushed the offense back five yards, then WKU recorded back-to-back sacks on Blazer quarterback Cody Clements from Gavin Rocker and Nick Holt and Rico Brown, respectively, that pushed the Blazers back to the 31-yard line.

Then, the wheels fell off.

The Blazers scored 21-unanswered points and had their way with WKU’s defense in the third quarter.

“We have to do better in the second half and be a four quarter team, not just play two quarters,” senior defensive back Cam Thomas said. “We just have to finish games, that’s the biggest thing with us right now.”

The Hilltopper defense allowed 381 yards in the second half while UAB running back Jordan Howard scampered for 135 yards and two scores after halftime.

Through five games, WKU’s defense has allowed 38 points and 516.8 yards on average per game.

“We’ll go back and look at it as hard as we can,” Head Coach Jeff Brohm said. “They had a good runner that ran strong and a quarterback who made some plays with his feet and they threw the ball deep on us. We need to play better.”

The Hilltoppers got a spark of excitement from their backfield on Saturday, and his name isn’t Leon Allen.

Redshirt sophomore running back Anthony “Ace” Wales recorded his best game in a Hilltopper uniform in a losing effort against UAB, racking up 138 yards on 14 carries for a total of three touchdowns.

All three of Wales’ touchdowns came in the first half off scoring plays of two, 75 and 21 yards.

The redshirt sophomore continued his role as the primary back in the second half due to Allen’s knee bruise he sustained in the first half of the 42-39 loss.

“I think Ace played well at times,” Brohm said. “He’s a guy that we wanted to get more looks. We did, and he’s very good in the open space.”

Despite Wales’ strong first-half performance, he recorded just 31 yards rushing in the second half.

“They did what any other defense does, adjust at halftime,” Wales said. “I feel like everything was on us. I’d say we came out a little more flat than we usually do. They came out ready to play. We tried to pick it up at the end but obviously we fell short.”

The Hilltoppers trailed the Blazers 35-27 with 5:52 remaining in the third quarter of Saturday’s loss, but managed to score twice before the end of the third quarter in the form of a touchdown pass to junior receiver Antwane Grant and an interception and 78-yard touchdown return by redshirt senior defensive back Ricardo Singh.

Technically speaking, those two scores should have put the Hilltoppers up 41-35, but WKU attempted two-point conversions to no avail after each touchdown, resulting in a 39-35 lead.

In addition, WKU had an extra point blocked in the first half. If the Hilltoppers would have gotten that kick off and converted on each of its two second-half field goals instead of having to settle for a possible two-point conversion, it could have meant the game.

According to WKU Head Coach Jeff Brohm, the Hilltoppers determine when to go for two based on a specific chart.