Money Moats: Lady Topper junior forward has knack for coming through in the clutch 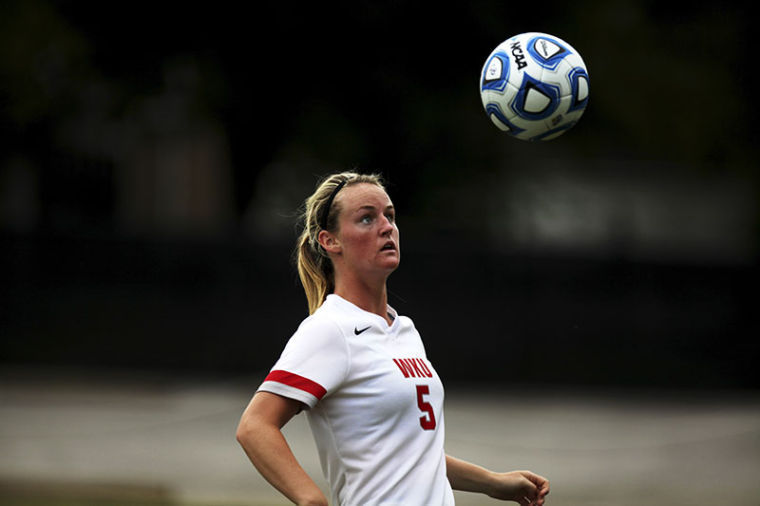 Lady Toppers sophomore forward/midfielder Lauren Moats waits for the ball to drop after being kicked down the field. WKU played against the University of Memphis and lost, 1-0.

With just five regular-season games remaining on the 2014-15 WKU soccer schedule, it’s crunch time for the Lady Toppers, which is something the team has grown accustomed to this season.

Six of the Lady Toppers’ 12 outings have come down to just one goal, which has WKU constantly on the prowl for someone to cash in when it matters most.

That someone this season has been junior forward Lauren Moats, who’s proven time and time again that she’s money in the clutch.

“It’s kind of a heat in the moment kind of thing,” Moats said. “It’s a mentality where you just have to do anything in your power to score, and it’s a great feeling to have your teammates feel that energy as well.”

Moats has been the complete package so far for WKU this season, leading the team with nine shots on goal, five scores and 11 overall points. She’s single-handedly secured three victories for the Lady Toppers this season against Lipscomb, Sacred Heart and Indiana State.

The 5-foot, 5-inch junior notched both goals in the Lady Toppers’ win against Lipscomb, the game-winning goal in the 96th minute of overtime against Sacred Heart and the only goal in WKU’s victory over Indiana State.

“She has always had a great nose for the net, along with an impressive ability to just go out there and score goals,” Head Coach Jason Neidell said.

Moats is originally from Louisville, but she moved to Nixa, Missouri in 2009 after her father, Kyle Moats, accepted the position of director of athletics at Missouri State University, prior to Moats’ recruiting process.

Neidell and the rest of the Lady Topper coaching staff never got the chance to scout Moats while she was in high school or on her club team. But through word of mouth, WKU heard about Moats’ talents and invited her to a recruitment camp her junior year of high school, which proved to pay off.

“Her natural instinct for being around the net caused her to make some impressive goals during camp,” Neidell said. “We recruited her immediately after that camp.”

Despite other offers, Moats fell in love with WKU during her camp experience and a tour of the university.

“I loved the campus here and how pretty it was, but I also the loved the people,” Moats said. “The people here are great, and the coaches are also great. I just really wanted to be a part of a program that seemed so enjoyable.”

Her freshman season showed flashes of her talent, as Moats emerged as one of WKU’s top offensive threats, netting seven goals and one assist for 15 points on the year — a mark that ranked second on the team.

Even with a successful first season on the Hill, Moats still took a role as a student of the game and learned from the upperclassmen above her.

“Amanda Buechel had a huge influence on me my freshman year, and I looked up to her so much because she fought through so many injuries and still came out with a bunch of success,” Moats said. “The way she took pride in the game and just enjoyed it after so many lost years was inspiring to me. Sydney Sisler and Taryn O’Shea were also great leaders for me as well.”

Now an upperclassman, the role has been reversed for Moats as she is now one of the leaders for a young team that has only four upperclassmen on its roster.

With so many games coming down to the wire for the Lady Toppers this season, it makes sense that Moats makes such big plays when you combine her talents with her intangibles.

“She has developed a lot of those intrinsic leadership qualities, but she has proved that she is more of a good teammate,” Neidell said. “She is the kind of person that people like being around, and she just wants to be the best team player she can be.”

As Moats moves into the latter part of her career, Neidell said the expectation regarding her productivity remains the same — do what she does best.

“My expectation for Lauren is to just go out and give her best day after day and let the pieces of the puzzle fall where they may,” Neidell said. “She is going to score goals, and she is going to get awards. We just want her to go out and be the best she can be.”