Band of Brothers: Hilltopper receiving core exemplifies ‘for each other’ mentality 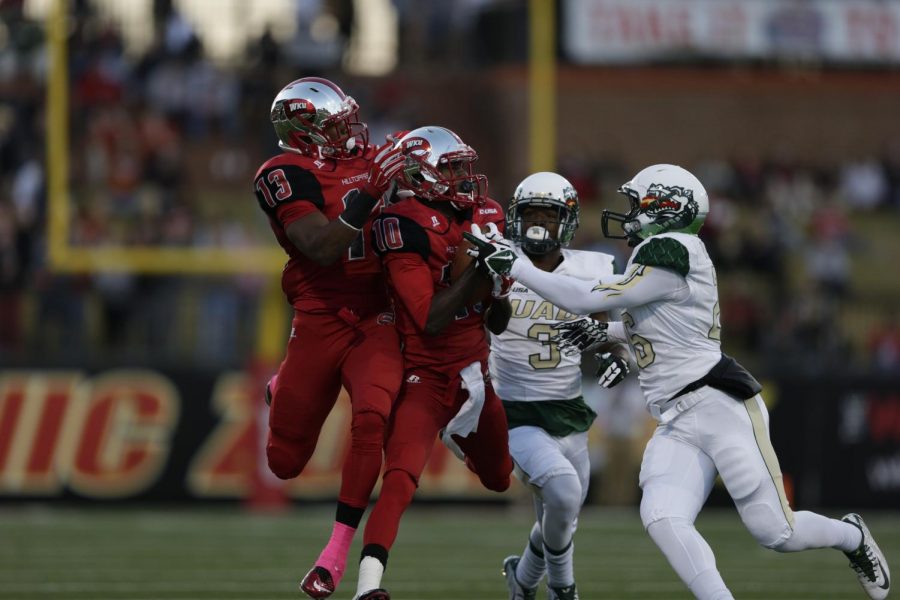 If you’ve ever found yourself anywhere within the vicinity of Smith Stadium while WKU football practice is in session, chances are you’ve probably heard Hilltopper wide receivers coach JaMarcus Shephard.

Shephard, who spent two years as a defensive analyst and volunteer quality control assistant before being promoted to wide receivers coach this season, is one of the more vocal coaches on WKU’s sideline, and it’s paid off thus far this season.

WKU is just one of three teams in the nation with six different receivers having totaled at least 20 catches. In addition, four Hilltopper receivers rank within the Conference USA’s top 10 in receptions per game, and three rank inside the top 10 in receiving yards per game.

“Obviously, we’ve been very successful — probably a little more successful than we’ve been in the past — as far as catching the ball, and getting yards after the catch,” Shephard said. “…I think those guys are taking pride in finishing. If you ever come out to our practices, I’m constantly yelling ‘finish, finish, finish, finish,’ so that’s important. Obviously, it’s showing on the field.”

The Hilltopper offense, which ranks fifth in the country at 547 yards per game, has been a result of a strong correlation between redshirt senior quarterback Brandon Doughty and his receiving core. However, the team’s dropped four of its last five contests, and in the second halves against UAB and FAU, the offense totaled just 232 yards and 19 points, spurring Shephard to challenge his receivers.

“When I talked to them on Sunday when they came in, I sort of challenged them a little bit and said, ‘What do we stand for as a receiving core?’” Shephard said. “…The number one thing they said was ‘brotherhood — we are a band of brothers.’ That’s a great thing. You want that from those guys.

“Ultimately, when we’re looking at it as a receiving core, we have to win the game. We feel like we should be the group that wins the game for the team.”

The Fort Wayne, Indiana native said one major area that his group of receivers exemplifies brotherhood in is blocking. A staple of the Hilltopper offense this season has been the screen pass, which makes blocking a vital ingredient to that recipe.

In the season-opener against BGSU, WKU totaled 272 yards after the catch, accounting for 48.3 percent of Doughty’s 569 yards, which was a program record before he tallied 593 at Middle Tennessee.

“We take a lot of pride in that,” sophomore receiver Taywan Taylor said. “Coach Shep preaches on that a lot. Yards after the catch — that’s what makes a great receiver. We have to take some pressure off our quarterback. …When we get the ball, we take pride in making plays and making people miss.

“As we go along during the season, we just look at what we can do to get better like blocking, coming off the ball and stuff like that, and just doing it for each other.”

The receiving core has unofficially accounted for 890 yards after the catch, accounting for 36 percent of Doughty’s 2,500 passing yards, which is the fourth-best total of any quarterback this season.

“Anytime you can get something easy and they make you look good, that’s a plus,” Doughty said. “I think we haven’t had that in the past. Those guys have confidence, they block for each other, and they play for each other. They’re able to create big plays with the opportunities they make down the field by blocking and running routes to get other people open. I think that’s the biggest thing that they do really well is that they’re a brotherhood.”

The Hilltoppers returned 78.5 percent of their receptions from a season ago, which ranked No. 19 in the country and paved the way for the core’s brotherly camaraderie. But the team’s also getting some new faces in the mix.

It’s safe to say that the Hilltoppers already had plenty of options, but the additions of junior college transfers Jared Dangerfield and Antwane Grant have proved to be vital for the Hilltopper offense. Dangerfield ranks first in receptions with 34 and is tied for first with McNeal in touchdowns with four. Grant is second in receiving yards with 361.

“It’s been great with those new guys coming in, Jared (Dangerfield) and Antwane (Grant), getting to know those guys from a personal standpoint then all of us just connecting and bonding from the get-go, from day one,” Taylor said. “We just go out there and we just like to compete with each other and work hard and just make each other better.”

WKU’s season has been one of uncertainty, but when Old Dominion comes to Smith Stadium on Saturday for a 3 p.m. kickoff, one thing’s for sure — the Hilltopper receivers are going to handle their business, and they’re going to do it for each other.