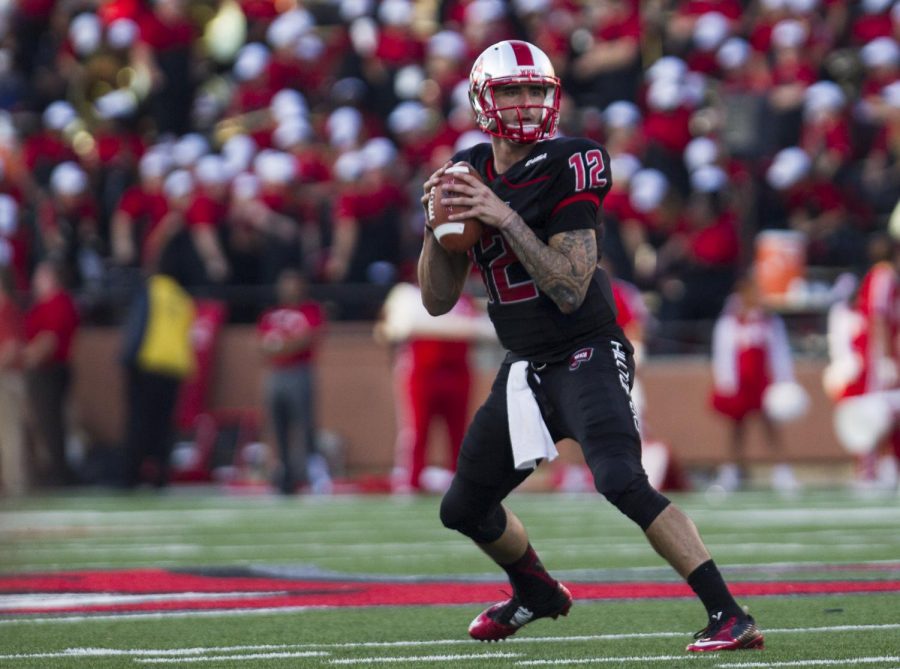 Redshirt senior quarterback Brandon Doughty (12) drops back for a pass during the third quarter of WKU's Oct. 25 game against Old Dominion. Doughty went 23 of 26 for 371 yards and five touchdowns, leading WKU to a 66-51 victory over the Monarchs. Brandon Carter/HERALD

But knowing him he’ll probably bake it himself and hand them out to each of the eight receivers that caught a pass for him tonight.

Each of them had a hand in history, and they’ll continue do so with five games left in the season.

Even if there is cake on their fingers.

Brandon Doughty is now the WKU record holder for most passing yards (2,871) and touchdowns (24) in a single season, and he’s got time to add to it.

“I think my Dad was more keen on the record than I was. He was talking to me about and saying ‘you need five touchdowns’ – I don’t really care. I just want to win the game.”

Doughty threw for 371 yards and five touchdowns while completing 23-of-26 passes in WKU’s 66-51 win over Old Dominion Saturday night.

If Head Coach Jeff Brohm wanted to he probably could have let Doughty throw all game and score over 100 points.

Ok, maybe not 100, but anything more than 66 points might as well be that much.

“I haven’t been a part of games like this back-to-back-to-back-to-back,” Brohm said after a short laugh after the game. “Every game is tight and close. There’s never a dull moment and the game is never out of reach, so it is very interesting.”

Yes, very interesting, especially considering this is a quarterback who was benched at one point last season.

Doughty had thrown eight interceptions in his first three games under former coach Bobby Petrino. At one point, word had spread he quit the team when the truth really was that he wasn’t going to start the next game.

Now as the story goes, he finishes the year leading WKU on a four game win streak with a confidence that carried over into his senior season and the rest, as they say, is history.

To think we had seen the best of best performances from him against Bowling Green underwhelms what actually is happening on a week-by-week basis with his play.

“From the beginning of the season I thought we had a heck of a squad as an offensive group,” Doughty said. “Our goal was really to score every single time we got the ball. I think it’s a realistic goal. We have the talent to do it, we just hurt ourselves sometimes. Tonight, things were clicking.”

I see the picture right now in my head. After WKU lost 31-24 at South Alabama last season where Doughty threw a pick-six and another in the endzone (three total), I saw the quarterback sitting up on a table outside the locker room wincing in pain being taped around his torso.

If you told me at that moment that this was the quarterback that a year later would be among the nation’s elite QBs and hold records that will probably stand at WKU for a long time, I would have called you a fool.

But look who fooled me instead.

Doughty now has 2,871 yards on the season with 24 touchdowns and just four interceptions with five games left remaining on the schedule.

Not bad for a guy who in his freshman season had it end early to an ACL tear followed by a sophomore season riding the bench.

Now his name is etched in the WKU record books for a good portion of the foreseeable future.

And he’s making it look easy as cake.