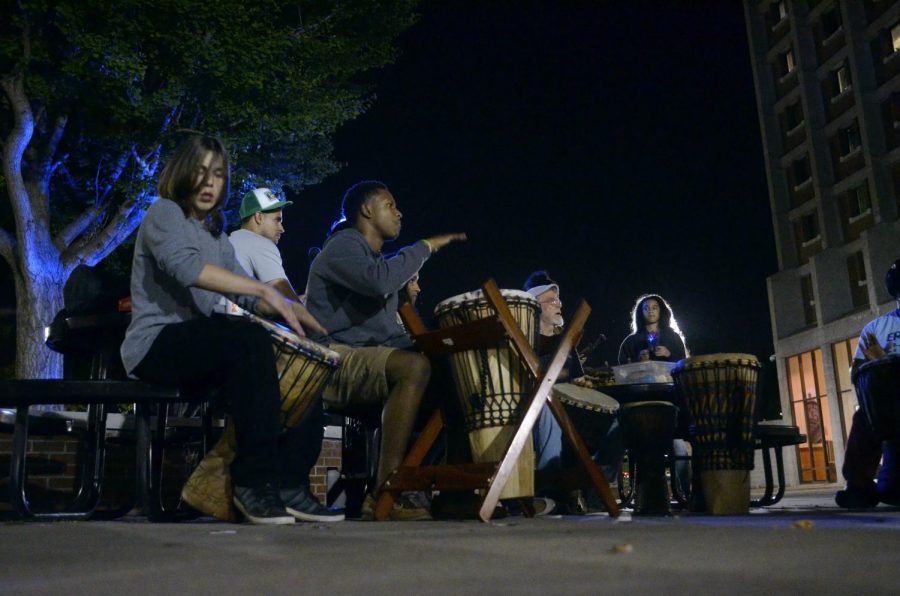 WKU students and members of the community meet together outside of Pearce-Ford Tower to participate in a therapeutic drumming session. It was brought to the WKU campus by members of the counseling department, including assistant professor Lacretia Dye, with help from LifeSkills therapist Wanda Eubank, who has experience in this form of therapy. Andrew Livesay/SPECIAL TO THE HERALD

Hats and hoodies didn’t stop the chill of the wind from beating against the hands of the drummers in front of Pearce-Ford Tower on Oct. 16.

There were many participants in the new activity, called Drum Circle, which is offered every Thursday night in front of PFT.

‘Thirsty Thursdays’ are commonly known on college campuses for students going out and partying at the end of the week, Dye said.

“Students are ultimately looking for a release, and we believe that providing a different outlet to students can make a change in some of the behavior they participate in on Thursdays,” Dye said.

The Drum Circle meets outside of PFT at 8 p.m. every Thursday. Due to the increasingly cold weather, Dye plans to reserve rooms inside of Downing Student Union to continue the circle.

There have been about seven Drum Circles so far this semester. The number of members varies week to week.

“Sometimes there are 12 and then other weeks there are 25, but most people come in and out of the circle — just get a feel for what it is,” said Moore.

Dye said there have been some regular students attending these drums circles, and everyone is welcome.

Some students, like Louisville freshman Wendy Reed, say the location is perfect for the event.

“The Drum Circle being outside of PFT is smart because a lot of kids come down to the circle,” Reed said.

As Dye danced inside the drum circle, while conducting the players to quicken or slow the beating of the drums, she explained that, “The Drum Circle is planting a seed on campus to offer students another way to have fun.”