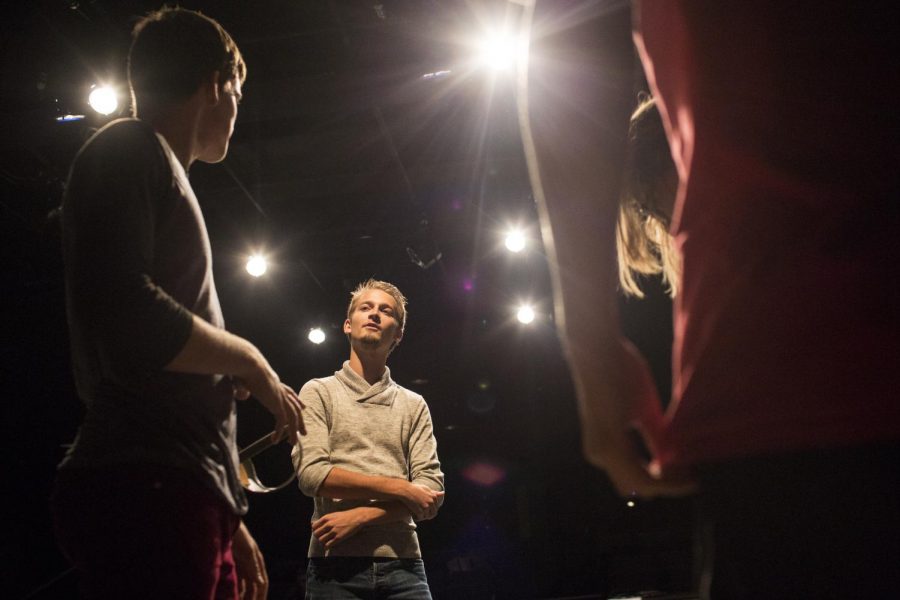 Lexington senior Eric Mattingly takes a moment during Friday's rehearsal to fi ne-tune and prepare for this coming weekend with the cast of "The Enchanted Attic." While his handpicked cast is relatively young, Mattingly loves the opportunity to pass down the knowledge he has gained while here at WKU. "It's fun to see these guys start to go in the right direction," Mattingly said. "I like helping them get to new places." Luke Franke/HERALD

WKU’s department of theater and dance will delve into the imagination of both the young and the old this weekend with the opening of “The Enchanted Attic.”

The show opens on Friday in the Gordon Wilson Lab Theatre and will be open through Sunday. Tickets are $5 and can be purchased through the WKU Box Office.

“The Enchanted Attic” is a tale of three children visiting their aunt. While exploring her house, the children come across a window that grants wishes and brings magical, fairy tale scenes right to them.

It is through one of these wishes that the children stumble upon Blackbeard, the most notorious of all of the pirates, played by Bowling Green junior Caleb Hoffman.

“I’ve never been a big villain,” Hoffman said. “(Blackbeard) is basically the villain of the show and it’s pretty awesome to be the villain. I’m usually the little boy character so it’s nice to have a different role for once. And hopefully I won’t get punned into that corner now that I’ve gotten this role.”

The whimsical feel of “The Enchanted Attic” drew Lexington senior Eric Mattingly to direct the show, making it his directorial debut at WKU.

“It encourages the actors to create characters rather than the script telling them how to be,” he said.

Having never directed a children’s show before, Mattingly felt like it was time for him to pay his dues. To gain a different perspective from acting, Mattingly began stage-managing and directing. It was something he felt was more suited for him.

“I think that’s something I can contribute more than just being an actor on stage,” he said. “I think I can help actors reach places that they weren’t aware they could do.”

Julie Pride, the publicist for the department of theater and dance, said there’s a difference in having children as an audience rather than adults.

“They’re the best audience because they have not been trained to be good audiences,” Pride said. “So, if they think it’s funny, they’re gonna laugh.”

While the children may enjoy the laughs, the cast hopes to reach into the childhoods of the older crowd in attendance. They want the adults to feel young, playful and, most importantly, remember their imagination.

“I hope they can figure out that, no matter how old you are, you should always have an imagination,” Hoffman said. “There’s no reason for you to lose it and imagination makes your life exciting. It should never be lost.”