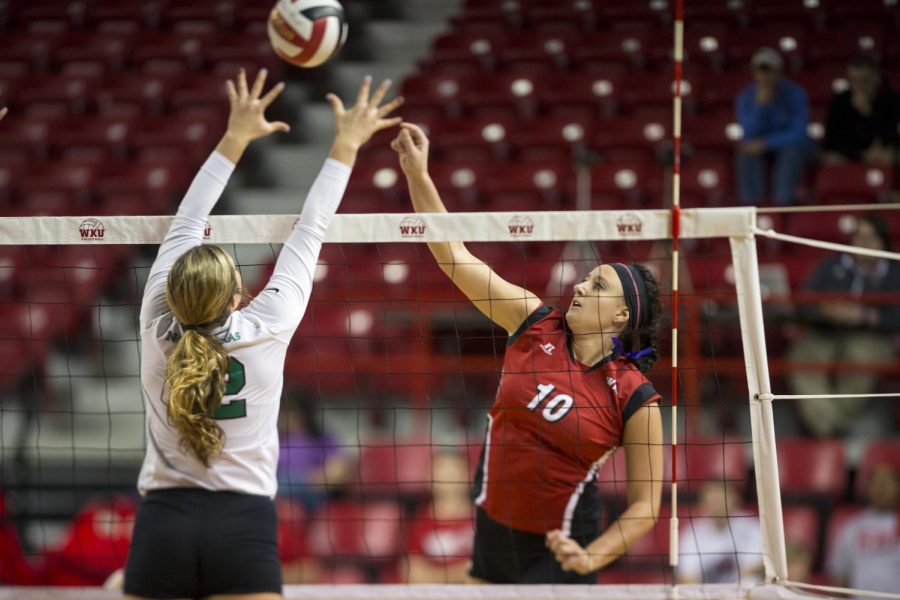 Junior outside hitter Haley Bodway goes up for a spike against a North Texas defender during WKU's match on Sunday. Bodway racked up 10 kills as WKU defeated UNT in four sets. Brandon Carter/HERALD

WKU volleyball split its Texas road swing this weekend with a 3-1 loss against undefeated Conference USA foe UTSA in San Antonio on Friday and a sweep of UTEP in El Paso on Sunday.

“Losses aren’t always a bad thing — they cause you to look back on yourself,” Head Coach Travis Hudson said. “We spent some time talking about it on Saturday, and we decided this was a pretty pivotal point in our season. This team hasn’t tasted defeat that much, and there is no shame in losing to the preseason favorite on their home court.”

Each team had the same number aces and digs at five and 51, respectively, but UTSA had three more kills than WKU at 57 and made more plays to seal the win.

“It was something I’ve seen coming awhile for our team,” Hudson said. “We have come out a lot of matches this year and played really well in the first set and then in the second set come out unfocused, and we finally played a team that was talented enough to make us pay for that.”

The Lady Toppers then traveled to El Paso for a matchup that proved to be much easier.

“Very rarely this season have we dominated a team from start to finish,” Hudson said. “You will see us win the first set easily and then trail the majority of the next one, and that has just been the mark of our team. On Sunday, we came out and played extremely well against UTEP.”

Freshman middle hitter Sydney Engle was also efficient in her attacks, hitting .750 on a six-of-eight stat line with no errors. Lucas dished out 39 assists to help WKU hit .471 for the match.

WKU returns home this coming weekend, hosting a rematch with FIU and FAU. The Lady Toppers take on FIU on Friday at 7 p.m. CT before facing the Lady Owls on Sunday, with a noon CT first serve.

“Hopefully, this will spring-board us back into the routine of getting better every day, because that is where we need to be,” Hudson said.

Friday’s match is “Team Appreciation Night,” where all local middle and high school teams can receive free admission after a team roster is faxed to the WKU ticket office prior to the match. Sunday’s matchup offers free admission to anyone who presents a ticket stub from the home football game against Old Dominion.