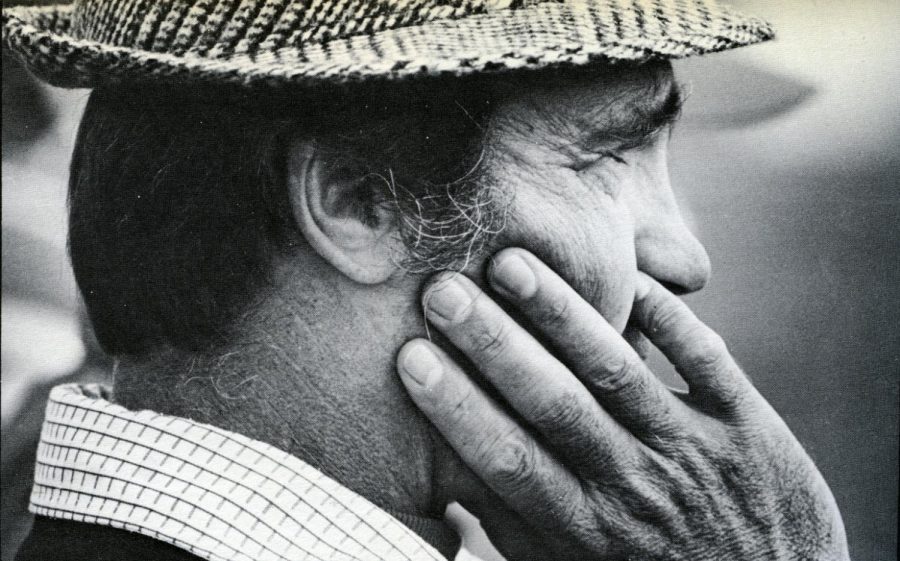 Here is a man standing on a bench. He stands tall in the moment, but he’s miniature of stature.

Here is a man standing humbled. Head bowed, asking of grace from a higher being. This faithful act is routine, but humbleness speaks louder in the muteness of defeat.

The man standing on a bench is of few words, but his presence alone is all you need to hear.

There aren’t many photographs of this man in a time of grief because he never expressed it. The few pulled from the archive all speak the same message — a man in dismay and thanksgiving.

Another picture shows this man seated low on a stack of towels at eye level with his team.

They both speak the same message, but the photograph of the man standing on a bench in the locker room resonates bolder representation.

Each player rests on one knee, torso leaning forward, in bowing formation toward his leader. Just a few minutes before the photo was taken, they all sniffed victory, but failed to taste it.

This is a photograph of pain. You can’t see it on his face, but you know it’s there.

You see his traditional wardrobe — khaki slacks, white and red patterned button-up with the collar pulled over the top of his jacket that has a patch over his left side that says ‘Western Ky. Football’ and another below with a seal with the words ‘Western Kentucky University.’

More importantly is the fedora. The grey, black and red color scheme is essential when defining the man bowing his head in defeat. Without it, he believed he’d catch a cold. One opposing coach wanted the hat as a trophy for defeating this man’s team.

One Sacramento sportswriter wrote this scene of James Wyne “Jimmy” Feix standing on a bench as a “masterpiece” of what would unfold before him in the locker room of the Camellia Bowl after a 16-14 loss to Northern Michigan.

Bill Conlin, of the Sacramento Union, wrote Feix’s simple message in the locker room as: ‘“Men of Western Kentucky, I’m proud of you. I know you’re disappointed, with every right to be. But I’m proud of you, the university is proud of you, and I want you to go out and be proud of yourselves.”’

Drake was sent home to Louisville three semesters into his college career due to grades. Blaming it on his immaturity, he lost faith in himself, and believed Feix and the other WKU coaches had also lost faith in him.

That was until his phone rang with a call of redemption on the other line.

“He called me once every two or three weeks just to see how I was doing and he called and encouraged me,” Drake said. “That turned the lights on. I was so thrilled that he did want me and that he did care about me. Him just calling me encouraged me to go to school while I was home and take classes.”

Drake, a wide receiver for WKU in 1975 and 1977-78, had to also re-earn his scholarship once he got back to campus. Drake went on to earn his master’s degree and coached at WKU for nine seasons. Drake has spent the past 11 years coaching in the NFL and currently serves as wide receivers coach for the Arizona Cardinals.

“I just can’t really explain what he’s meant to me as a man, as a father, as a coach,” Drake said. “So many things I’ve learned from him that I’ve taken with me on this journey that I’m on. I’ll forever be indebted to him, I’ll always love him and he helped me become a man. They were lessons that allowed me to become a man and allow me to do the things I’m doing today.”

“I had already had him on a pedestal before I got here,” Edwards said.

Two years into Feix’s coaching tenure, Edwards joined his staff as a parttime athletic trainer in the fall of 1970. Feix, a man of few words, didn’t need to say much. His breakdown of the English language was simple, yet poetic.

“Any time he talked to the team, you wanted to be there to hear what he had to say,” Edwards said. “He was a good speech maker. He just had a way with words.

Edwards remains good friends with Drake, who played while Edwards was an assistant. Drake concurs with Edwards in that Feix’s presence glowed larger than the man himself.

“I was in awe of him,” Drake said. “He wasn’t a very big man. He towered over us all with his presence. That’s one thing I can say is he had such great presence and his dialect and the way he talked to us and communicated because it’s just unbelievable. So many things that he did and said, it sticks.”

For those who contained no prior knowledge of Feix, it didn’t take long to respect his shadow. When former head coach David Elson first joined Jack Harbaugh’s staff, Feix earned his respect rather quickly.

“I had only been there for maybe a month,” Elson said. “Coach (Jack) Harbaugh just stopped and pulled everybody up and there’s this guy standing there and it’s coach Feix. He said a few words and the big thing with him was that he absolutely loved Western and those kids as much as anything.”

Even when the world modernized, Feix handled all of his business the old fashion way — by hand written letters.

In his later years, speaking became limited. Chain-smoking was a factor in developing throat cancer that limited his speaking opportunities. Writing a hand written letter was still the style Feix preferred.

“He would always send me letters throughout the years of encouragement, telling me how proud he was of me and I cherish those letters and keep those things,” Drake said. “I pulled some out (Tuesday) and just looked at them, learning some of the lessons from life that I learned from him.”

During Feix’s later roles at WKU, he served as director of Alumni Affairs and athletics director. Current Athletics Director Todd Stewart keeps a letter Feix sent to him in April of 2013 expressing his gratitude and appreciation for Stewart.

“That’s just kind of how he was,” Stewart said. “He was so thoughtful and so caring. Even in the last couple of years when his health declined, he still took great pride in being involved.”

Current WKU Head Coach Jeff Brohm had only been on the job for a few months before his first face-to-face meeting with Feix. Edwards, now the director of Athletic Training and Sports Medicine, and Brohm visited with him during the spring. Since then, Edwards has noticed more mail from the Feix residence addressed to Brohm.

“He was always so gracious and thanked us for coming to see him and real humble about everything,” Edwards said. “They had a good conversation. Of course, (Brohm) knew who he was and wanted to meet him, see him and visit with him. I noticed since the season started the mail comes down here. I’ve seen letters from Coach Feix to Coach Brohm in hand written envelopes in recent weeks.”

When Feix’s health began to decline rapidly in recent weeks, Brohm made it a point to visit the man the team will honor for the remainder of the season.

“I went and saw him Friday night before the game, and he’s the guy that pretty much started the winning tradition here,” Brohm said after Tuesday’s practice. “He’s somebody that we have to pay our respects to. He’s definitely up there in heaven and we appreciate everything he’s done and we’re definitely praying for him and his family right now.”

The full version of this story can be read at wkuherald.com.