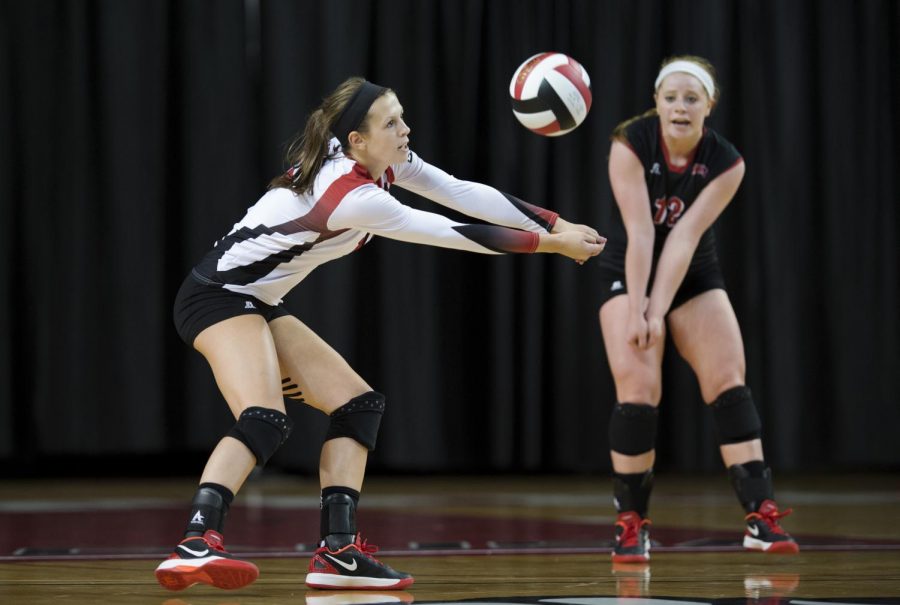 For the second time this season, WKU volleyball has secured a winning streak of eight games or more.

The Lady Toppers (19-4, 7-0 Conference USA) extended their current streak to eight this weekend as they claimed home victories against Marshall (9-11, 3-2) and North Texas (12-8, 3-4) to remain unbeaten in league play. WKU is currently tied for first place with UTSA in the C-USA standings.

The Lady Toppers’ win against Marshall was made possible by their net defense.

Freshman outside hitter Alyssa Cavanaugh and junior outside hitter Haley Bodway put in a strong showing on offense, tallying 15 and 12 kills, respectively. WKU hit .351 with the help of freshman setter Jessica Lucas’ 42 assists.

“It was an interesting night for our team,” Head Coach Travis Hudson said. “I didn’t think we played particularly hard (against Charlotte), but I thought we did (against Marshall). I really liked our energy and just how hard we played.”

“We played really well — it usually seems like we either play really hard, or we have great focus,” Hudson said. “Anytime when you can do both you’re going to be good, and we were in the first two sets.”

Cavanaugh was undeniable on offense, notching 21 kills and a .529 hitting percentage. Eleven of her 21 kills came in the first two sets.

“We started out very well. Our energy was up, and I thought we were taking care of our jobs and getting things done,” Cavanaugh said.

“I’m just trying to do my job. I want to do my part — I feel like that’s a strength we have in our team that everyone does their part.”

The third set started out disastrously for the Lady Toppers.

Tracking earned versus unearned points is something Hudson and his coaching staff have been doing all season, and this is nothing new for the young, inexperienced team.

“It is an issue for our team,” Hudson said. “Sometimes teams have to lose a game before they can get the message, and I’m trying like crazy to make sure we don’t.”

In the fourth set, the Lady Toppers were able to better manage their errors, but not entirely eliminate them, which caused some trouble for the team in the early stages of the set.

“In the fourth set, when we started struggling it was because of our offense, which is unusual for us. Our team got really bothered by that,” Hudson said. “I just told them to keep defending — our offense will right itself.”

This Friday, the Lady Toppers will travel to San Antonio to take on UTSA (11-7, 7-0) — the only other unbeaten team in the C-USA.