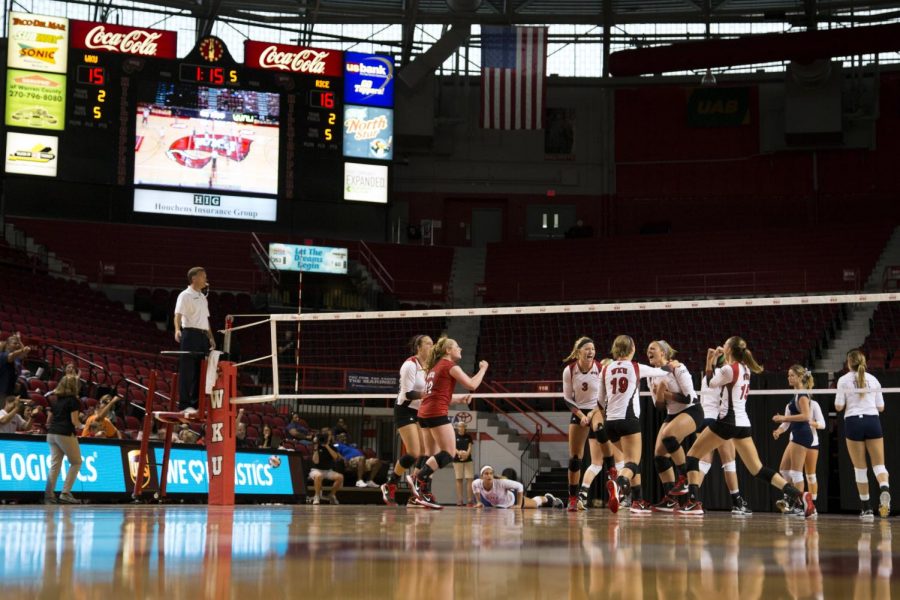 The first set was one of frustration for Head Coach Travis Hudson and his young team, giving up five service errors.

“Serving is the equivalent of free throw shooting in basketball,” Hudson said. “We were not very good from the service line tonight, but I always enjoy the nights when we play hard.”

It wasn’t all frustration, though. Junior outside hitter Haley Bodway notched five kills on the set – equal to freshman outside hitter Alyssa Cavanaugh. Cavanaugh also tallied 4 digs to offer a solid balance of offense and defense.

“I thought we played really hard tonight. I loved our energy, we just didn’t play very smart,” Hudson said. “Mentally, we were not good tonight.”

The team as a whole worked efficiently in the first set as well, totaling 19 kills and offering a .500 hitting percentage.

The second set would be no different for the Lady Toppers offensively. Cavanaugh and Bodway again led the charge in kills with seven and four, respectively.

Freshman setter Jessica Lucas, who dished out 16 assists in the first set, one-upped herself with 17 in the second.

Service errors were slightly tamed in the second set, adding only two to the existing five for a total of seven.

The Lady Toppers would complete the come-from-behind win in the second set with a kill from junior middle hitter Noelle Langenkamp at 25-21.

“With this team, what I’ve always liked is we just keep playing; if we are behind, we keep playing,” Langenkamp said. “We were kind of blowing some assignments in that second set, but we are able to get that back on track and that was what allowed us to still win.”

The third set would prove to be another come-from-behind victory for WKU.

Senior defensive specialist Mollie Pajakowski dominated the back line, grabbing five digs on the set to bring her total to 10 on the evening.

Georgia O’Connell led the team in digs on the night with 14 – adding three of those in the third set.

Cavanaugh and Bodway each added three kills in the third set on the way to sealing up the sweep. The duo would total 15 and 12 kills, respectively.

WKU took a timeout while being down 16-17 late in the third set.  Coming out of the timeout, WKU would grab five straight points, and not look back, finishing up the set at 25-20.

“I think we competed really hard, and I don’t think that is something we did well on Tuesday,” Langenkamp said. “We really need to carry that over into our matchup Sunday.”