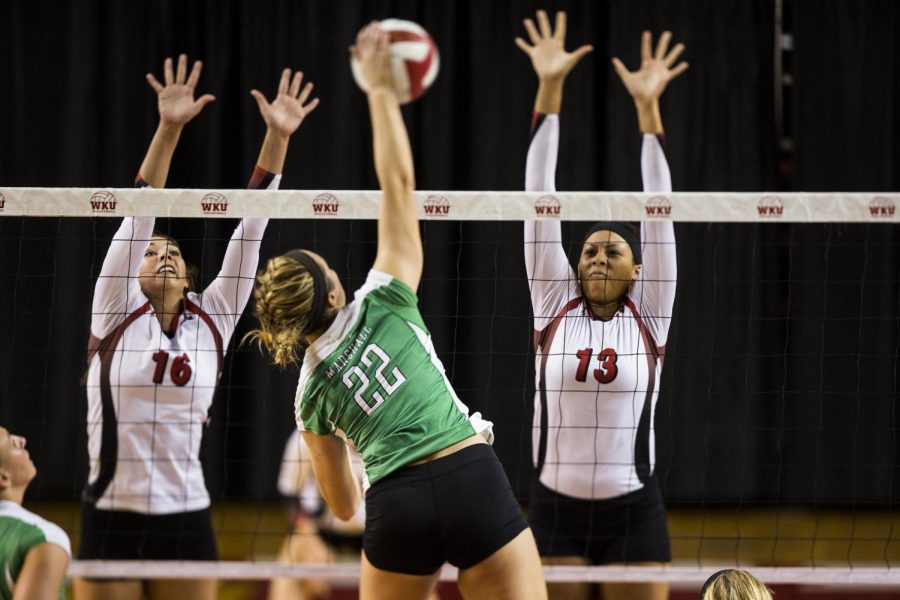 The team got the ball rolling on Friday night against FIU, commanding the vast majority of the game and winning with scores of 25-11, 25-13 and 25-20.

Leading the charge for the Lady Toppers was senior middle hitter Heather Boyan, who notched her fourth-straight match without an attacking error.

“This whole week we’ve just been talking about playing with a lot of energy, and I think that really helped us,” Boyan said. “I just try to get excited about every point that we win.  That energy has to come from somewhere. I just do whatever I can to be loud and positive.”

Boyan tallied 14 kills, hitting .636 for the match while adding five blocks and three digs to her stat line on the evening.

“I thought (Friday) was one of Heather’s best performances of the season, and not just because she hit at a high percentage,” Head Coach Travis Hudson said. “Heather probably made 10 plays on balls that were chipped over the net. She just stayed engaged in every play we made, and I was just really, really pleased in the way she played.”

Sunday’s matchup proved to be more of a challenge for Hudson and his youthful squad.

A stout defense, led by sophomore defensive specialist Georgia O’Connell with a career-high 19 digs, proved to be the difference maker for the Lady Toppers against FAU in a game where WKU’s offense uncharacteristically struggled.

“They played with so much energy,” junior middle hitter Noelle Langenkamp said. “I think we were just trying to match their level of intensity. Volleyball is such an emotional sport — you just have to. If you are able to match it, then the more talented team will win.”

Freshman setter Jessica Lucas proved to be vital on both sides of the ball for WKU, notching a double-double with 47 assists and 12 digs.

Boyan, again, would put up an attention-grabbing performance, adding three solo blocks to her total of eight on the contest. Langenkamp added five of her own while Lucas had four and freshman outside hitter Alyssa Cavanaugh recorded three.

“My only thought after the first set was to keep my team calm because our offense let us down in the first set and that will never continue throughout a match,” Hudson said. “Our offense is in the top 20 in the nation. Our offense will come if we stay the course, but when we struggle offensively, we start to panic and blow defensive assignments.”

Offensively, Cavanaugh put down 15 kills and Boyan added another 11.

Errors hurt both teams in the fourth set, as both hit below .100 for the frame.               An ace from sophomore defensive specialist Kaelin Grimes tied the set at 19 before consecutive kills from junior outside hitter Haley Bodway, Lucas and Boyan had WKU with match point at 24-21. An attack error on the Owls sealed the deal.

WKU hits the road for three matches over the next two weekends, starting with UAB on Friday.