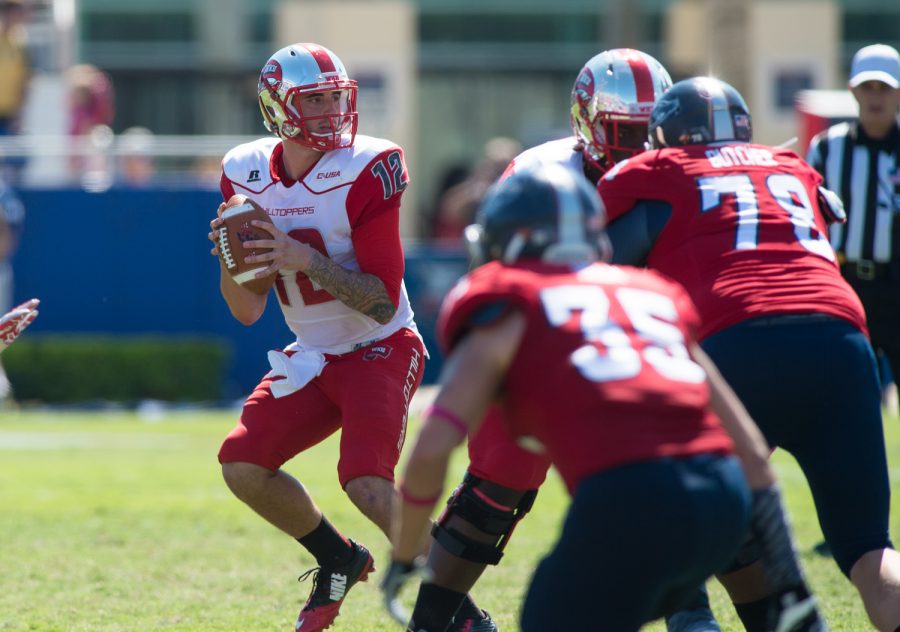 Looking to avoid its worst start in league play since 2009, the Hilltoppers are set to welcome Old Dominion to Smith Stadium on Saturday at 3 p.m.

The teams are a combined 1-6 in conference play and sit at the bottom of the East Division in league standings. A loss would give WKU (2-4, 0-3 Conference USA) its worst start in conference play since 2009 when the team finished the season with a 0-12 record.

On a positive note, the Hilltoppers will play four of their six remaining games at Smith Stadium, but since WKU has dropped four of its last five by a combined 21 points, Head Coach Jeff Brohm and company know now more than ever that each game has the potential to be neck-and-neck.

“I think they’ll respond well,” Brohm said. “We’ve actually practiced very well. We’ve practiced hard. We’ve made strides in practice, and I think that our guys want to get it done. …We know, at this point, more than before, that it doesn’t matter who we play. It’s going to go down to the wire.”

Old Dominion (3-4, 1-3) has lost its past three games, including a 41-28 decision to Middle Tennessee at home and a 56-14 defeat at Marshall. The Monarchs rank sixth in the league in total offense and ninth in total defense at 416.6 and 463.9 yards per game, respectively.

Senior quarterback Taylor Heinicke leads a cast of talented individuals on the Monarchs offense. Heinicke currently ranks fourth in the league in passing yards per game at 259.3, and holds career totals of 51 touchdowns and just 16 interceptions in his three years as a starter.

Heinicke will be handing off to sophomore running back Gerard Johnson and freshman running back Ray Lawry. Johnson ranks 10th in rushing yards per game in league play with 64.3. Lawry comes in at No. 9 on the conference’s touchdowns scored rankings with seven.

Redshirt senior receiver Antonio Vaughan leads the Monarchs in receiving touchdowns with seven, along with a kick return for a score this season. Sophomore receiver Zach Pascal leads the team in receptions and yards with 37 and 509, respectively.

“We have to just do little things like get some stops when we need them, tighten up the coverage a little bit here and there when we need it. We have to find ways to not give them the easy, uncovered throws, which we haven’t done,” Brohm said. “…We all have to look in the mirror and get better.”

With the Hilltoppers averaging 416.7 passing yards per game — good for second in the country — Brohm said it’s important for the running game to get going in order to take a load off of redshirt senior quarterback Brandon Doughty.

The Monarchs are giving up 232.1 rushing yards per game, which ranks second-to-last in the league.

“If we put too much pressure on the passing game to always perform at a high level, that’s not going to happen,” Brohm said. “We have to find ways to distribute the ball, run the ball and not put as much pressure on our quarterback, and find different ways to move the football.”

With four of six games at home to finish the season, the Hilltoppers will have the crowd to their advantage, but redshirt senior Willie McNeal said the team needs to stay focused for the entire 60 minutes.