EDITORIAL: Ransdell’s salary is too high 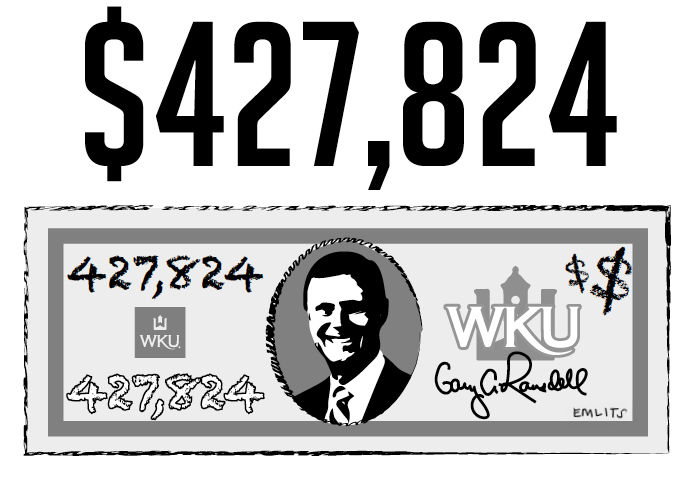 Our stance: He makes too much money, and his recent donation isn’t enough.

Two weeks before the meeting, Ransdell made a donation of $5,000 back to the WKU Foundation and pledged to do so again every year from then on. That pledge went unreported until last week, when the Herald reported the donation pledge and the Bowling Green Daily News subsequently released an opinion piece lauding his philanthropy.

A Student Government Association resolution approved on April 15 called for a pay cut to Ransdell’s salary for the 2014-2015 academic year. At the SGA meeting, Ransdell was asked if he would take a pay cut.

Instead, Ransdell opted to donate $5,000, slightly more than the 1-percent increase to his salary he was receiving this year.

“I chose to make a $5,000 charitable gift and will do so each year, which is considerably more than what the 1-percent variable equated to in my salary,” Ransdell said.

An addendum made to his contract in 2007 includes a 10-percent salary increase in 2017, which means in just a few years he has a $42,782 raise heading his way. With this contract, his total pledge amount over the next eight years would be reimbursed to him in one year.

So sure, a $5,000 yearly donation is a pretty substantial commitment for the average citizen. But when you make more than $1 million every three years, it starts to look pretty measly.

Most who defend Ransdell’s salary do so through comparison to other Kentucky university presidents. It’s impossible to make this argument without picking and choosing presidents that suit the argument.

For instance, University of Kentucky President Eli Capilouto makes $525,000 — approximately $100,000 more than Ransdell. On the other hand, Kentucky State University’s interim president Raymond Burse just gave $90,000 of his $349,869 salary to increase university workers’ pay to at least $10.25 an hour.

The benefits in his contract include complete health insurance, life insurance, an entertainment budget that includes membership at a local club, a new car every two years free for personal use, complete coverage of any travel expenses for him and his wife and a free house with all utilities and upkeep paid for by WKU.

WKU may be struggling to find money more than ever, and history shows that they usually push the burden onto students.

Ransdell should reconsider that pay cut, and WKU in general needs to reconsider his pay. It isn’t a matter of whether or not Ransdell is worth it.

The question becomes: Is anyone worth this much?