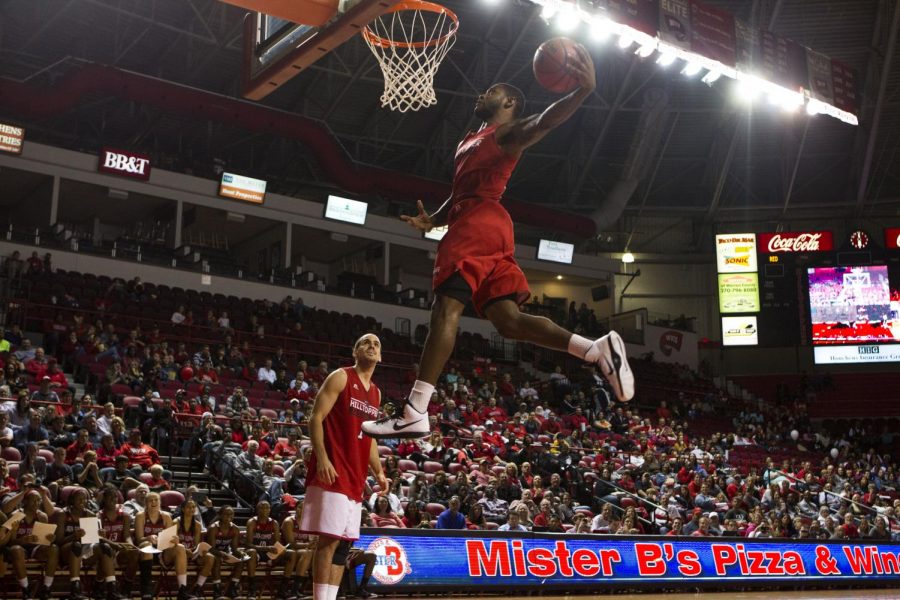 Ayinde Sprewell won the slam-dunk contest at Hilltopper Hysteria Saturday night, but that wasn’t even the best dunk of the night.

The show was supposed to be over when Head Coach Ray Harper took hold of the microphone and requested that senior point guard Trency Jackson put on one last performance.

Jackson then did what Jackson does and brought the crowd to its feet with an under-the-leg 360-attempt that bounced off the rim straight in the air and swooshed into the net.

It’s really the last show for Jackson and three other Hilltoppers who have been consistent playmakers since Harper took over for Ken McDonald in January 2012.

Seniors George Fant, T.J. Price, Kevin Kaspar and Jackson have unfinished business to attend to after a 20-12 season ended in a one-point loss to Louisiana-Lafayette in the Sun Belt Conference Tournament in March.

There were approximately 4,500 fans in attendance Saturday night at Hilltopper Hysteria to get their first look at the new team since that bad night in New Orleans.

Sorry, it wasn’t anything like watching Drake air balling in a shoot-around in Lexington to endorse a sell-out crowd that paid hundreds of dollars to watch Big Blue Madness at midnight.

No, it wasn’t anything close, but even still, who wouldn’t want to see a free event of silly choreographed introductions in smoke and lights, followed by the only dunk fest you’ll see all year?

The team saw 4,773 in average attendance in Diddle Arena last season and if these four stay healthy the entire time, that number could rise for their last season, or ‘show,’ at WKU.

Freshman forward Justin Johnson said after Hysteria that he has been coming to the event for three years now.

“Watching it as I was growing older in high school and now to finally participate was a really big deal for me,” he said.

Johnson, rated a three-star recruit by Rivals.com, has the right idea.

Wins produce excitement, which in turn will boost attendance. If ever there were a group primed to produce results the school wants, it’s this senior group.

Heading into their senior seasons, Price ranks 25th in WKU history with 1,236 points and Fant sits at 30th with 1,180. Price, Fant and Jackson were the top three scorers for the Hilltoppers last year, with Fant and Price leading the team in rebounds.

Entering their first year in Conference USA, Price and Fant find themselves a part of the Preseason All-CUSA team, but WKU doesn’t even scratch the top four of the preseason coaches’ poll.

That’s just part of joining a new conference — respect from other teams must be earned regardless of your reputation in the Sun Belt Conference.

Johnson has the right idea and hasn’t even played an official game in a WKU uniform yet. If the freshmen know what’s at stake, then the veterans of this Hilltopper team understand this is their last chance to make a show as well.