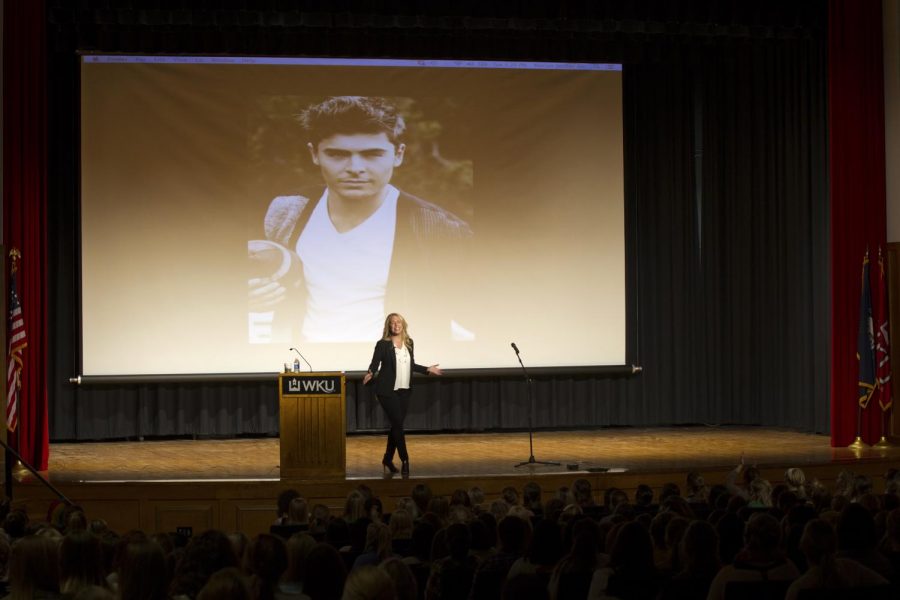 Marian Jordan Ellis, a Christian author, came to WKU for “Girls’ Night Out” on Tuesday to share her testimony and encouragement with the women of WKU.

Ellis, whose talk was sponsored by the Baptist Campus Ministry, has traveled the world telling girls about her mistakes and the best decision of her life: finding the truth of Jesus Christ.

Ellis shared her testimony Tuesday night in a packed Downing Student Union auditorium. Her presentation was based on her book “Sex and the City Uncovered.”

Ellis grew up in a home where she felt unwanted. In middle school, she was taunted for being tall and having hair that was too curly.

In college, she got a hair straightener, joined a sorority and started dating a guy her sisters referred to as “Mr. Unattainable.”

It wasn’t long before Mr. Unattainable told Ellis, who was a virgin, that sex was necessary to keep the relationship going.

“I pretended like it was no big deal because that’s what everybody told me to do and I pretended like I didn’t care but inside my soul was like a completely different story,” she said about the break-up. “Inside, my heart was saying, ‘This is a big deal.’”

Post-graduation, Ellis landed a dream job in a big city, where she channeled her inner Carrie Bradshaw with new clothes, a new car, new bars to test and new men to meet. It was at one of these bars, with an empty martini glass in hand and a feeling that she still wasn’t enough, that Ellis said her first prayer to a god she wasn’t sure existed.

After a co-worker invited her to an event at a church, Ellis heard a speaker say a sentence that would shatter her world: man is created with a God-shaped hole in his soul that can only be filled by God himself.

Ellis said she realized that sin had consumed her life and that God forgives those sins. She referenced a story in the Bible that talks about how Jesus prevented a woman caught in the act of adultery from being stoned to death after reminding the churchgoers with stones in their hands how they too had sinned.

“They looked at her and, when they saw her sin, they had to see their own,” she said. “And then they walked away.”

Since finding God, Ellis has published six books about her experiences and growth in her faith. She also founded and is president of Redeemed Girl Ministries, an organization that reaches out to women about the truth of Jesus through online teachings, discipleship resources and events like “Girls’ Night Out.”

Megan Cole, a student from Corbin, said she thought the talk was powerful and relevant.

“It correlates well with the audience, and I think it just hit home with a lot of people, including myself,” she said.

Cole had heard of one of Ellis’s books and attended the event to hear the author speak about how her life had been transformed.

“Her testimony, I think, matches up well with many of the girls that are here,” Cole said.

Ellis wrapped up the presentation by reminding the audience that, after all she had gone through, she ended up finding out who she was.

“I know who I am because I know whose I am,” she said.