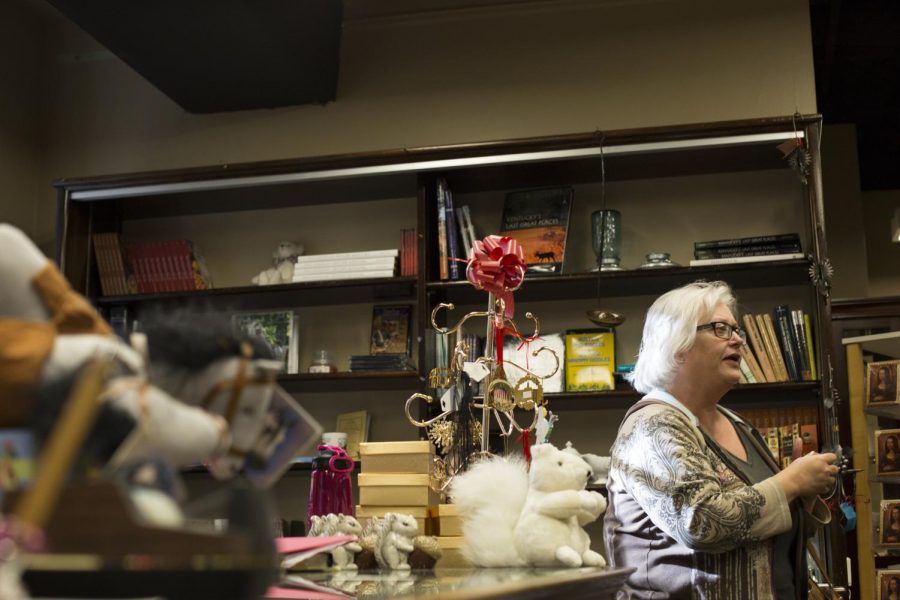 Victoria Gordon, an associate professor of political science, shops for gifts to give to her grandchildren over the holidays at the Kentucky Museum Store. "They always have great holiday gifts," Gordon said. "I'm sad to hear they are closing down." Luke Franke/HERALD

Those wanting to buy a stuffed white squirrel or Big Red bottle cap rings from the Kentucky Museum Store will need to act fast. The store is closing next semester.

One of the new exhibits, “Ecuador Unframed: the Art of Oswaldo Guayasamin,” will be featured in the space where the store is, starting in February.

Bjorkman said the exhibit is a part of the International Year of Ecuador program, a year-long celebration of Ecuador at WKU.

Future countries, such as South Africa and South Korea, will be celebrated in the coming years.

“As we celebrate those different countries, I want the Kentucky Museum to be a part of that,” he said.

Bjorkman said in the spring he will work with Patricia Todd, associate professor of marketing and sales, and some of her students to help him analyze  the store. They will look at how it has fared over the years and compare it to other museum shops around Bowling Green.

Bjorkman said that the store may re-open, but not for a couple of years, after feedback is received on how the store should be run.

“There’s a finite amount of space in the museum and we have to be very thoughtful about how we use each and every part of it,” he said.

In order to clear the store space, all merchandise in the store is 50 percent off.

Deborah Cole, afternoon lobby receptionist for the Kentucky Museum, said she is sad to see the store go. Cole was the manager of the store from 1995 to this July.

“I put my heart and soul into it for almost 20 years,” she said.

Cole said she has had many fond memories throughout the years and said it was probably the best job she has had in her life.

“At Christmas time, I always did an open house,” Cole said. “I would give a big discount for two days and I would have refreshments and door prizes and that was really fun…it was good seeing everybody and trying to help them find just the right thing for their presents.”

Although the store is closing, Cole will remain at the front desk of Kentucky Museum, just a couple of feet away from the doors of the shop.

“I just want to thank everybody for 19 wonderful years and I hope they’ve had as much fun as I have,” she said, holding back tears.