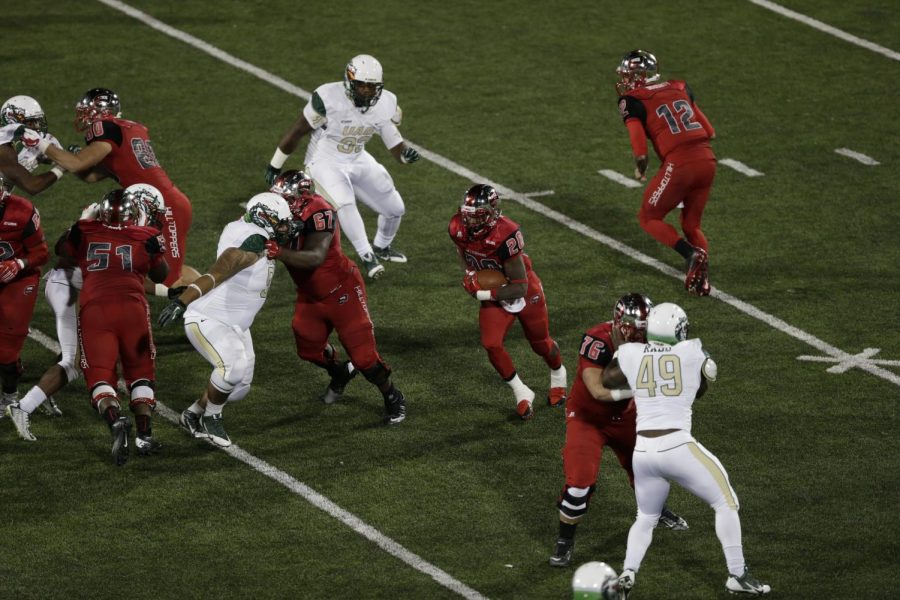 Following WKU’s slim 42-39 loss to the Alabama-Birmingham at Smith Stadium Saturday night, UAB Head Coach Bill Clark and junior linebacker Jake Ganus gave credit where it was due in regards to the Hilltopper offense, and for good reason.

WKU’s 576 total yards per game is good for sixth in the country, and if it wasn’t for UAB’s sound defensive adjustments in the second half on Saturday, the Hilltoppers would have more than likely bested that clip.

The 503-yard offensive performance against UAB is the second-lowest mark this season for the Hilltoppers, coming in behind WKU’s 400-yard showing at Illinois on Sept. 6.

“Offensively, we didn’t know if we could slow them down,” Clark said. “We made some good adjustments for the second half, came back, played well. We tried to give it away, but you know at the same time, they made plays. It was just a classic game right there.”

He also hit nine different receivers for completions. He’s reached that mark three times this season, and in the 50-47 triple overtime loss to MTSU on Sept. 13, Doughty completed passes to 10 different targets.

Prior to the season’s start, redshirt senior wide receiver Willie McNeal said he thought Doughty would have a season to remember on the Hill, and through five games thus far this season, he looks to be correct.

“They have (one of the best) offenses I’ve seen,” Ganus said. “They are explosive. They’ve got playmakers everywhere. Their quarterback has a great arm.”

As a result of Doughty’s success thus far, five Hilltopper receivers — McNeal, junior Jared Dangerfield, sophomore Taywan Taylor, junior Antwane Grant and junior running back Leon Allen — have recorded at least 23 receptions on the season, making WKU the only program in the country to do so.

“Oh my gosh, what could they not do?” Clark said. “They could throw it and catch it. Man, they caught the ball so well. I think they made every catch in the first half.”

The WKU offense found productivity in an unfamiliar place on Saturday. Redshirt sophomore running back Anthony “Ace” Wales erupted for 138 yards rushing on 14 carries for three touchdowns — 107 yards and all three of his scores came in the first half. All three clips are career-highs for Wales.

Although the Hilltopper offense received praise from the Blazers, it wasn’t as productive as usual in the second half of Saturday’s game, totaling 133 yards compared to the 370 it put up in the first half.

Head Coach Jeff Brohm said the team couldn’t carry out its offensive plan in the second half, and will use the upcoming bye week to work on execution.

“I thought we played well in the first half,” Brohm said. “They tried to press us up, but we found ways to make some plays. In the second half, Leon Allen was out and we got Ace Wales and Joe Brown going. I wanted to start the first drive running the ball. They played us soft coverage the first three plays, and we didn’t get the first down running. That was disappointing. That hurt us.

“Then they came back the next series with soft coverage again, and we didn’t execute. Then once they got the lead, they manned us up with two high safeties and dared us to run the ball. We didn’t find a way to execute.”