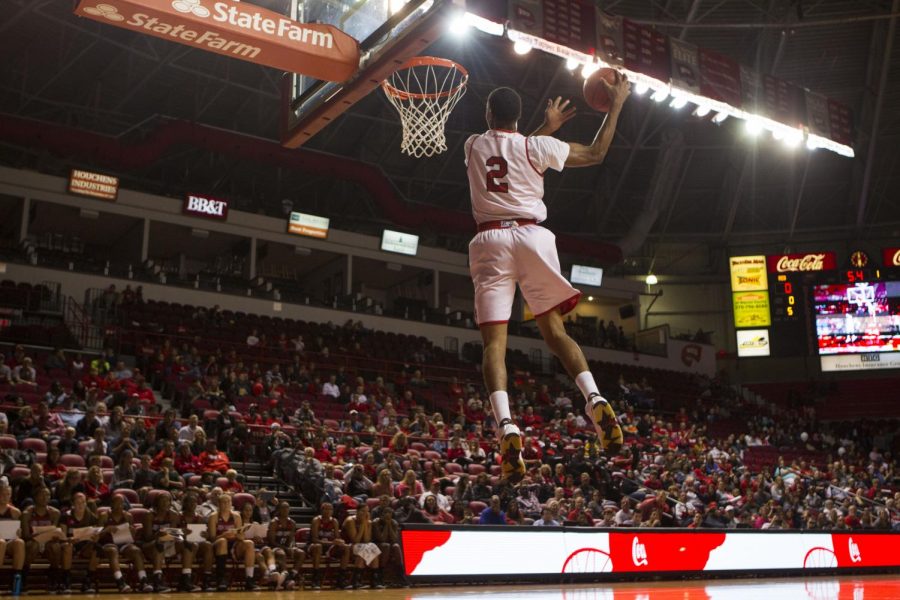 Freshman guard DJ Clayton dunks during the slam dunk contest at Hilltopper Hysteria on Oct. 18 at Diddle Arena. The event featured player introductions for both the men's and women's basketball teams, scrimmages, a three-point contest and a slam dunk contest. Brandon Carter/HERALD

With basketball season just around the corner, the Hilltoppers and Lady Toppers tipped off the 2014-15 season with their annual season-opening event, Hilltopper Hysteria, on Saturday night in Diddle Arena.

Redshirt sophomore guard Chris Harrison-Docks led the men’s red team with 14 points off of four three-pointers. Freshman forward Justin Johnson tallied 14 points and 13 rebounds for the white team in his first action as a Hilltopper.

On the Lady Topper side, senior guard Alexis Govan scored 15 points for the black team while Sophomore forward Bria Gaines racked up 12 points and nine rebounds to go along with Govan’s performance.

Govan played in only 11 games a season ago due to a stress fracture in her left tibia.

“I couldn’t stop smiling, I think my teammates knew that I was excited to be here with them and it didn’t matter what happened.” Govan said.

“It was the best experience I’ve ever had in my life,” Sprewell said. “It was fun and the crowd was excited. It was a joy I can’t explain. It was wonderful.”

The hysteria continued with the brand new three-point shootout event, pitting freshman forward Ivy Brown and junior guard Micah Jones against each other, along with one lucky Red Wave member on each team. Excitement filled the air as the two teams frantically threw up three pointers. Jones and her teammate immerged victorious after the shootout.

“It was a lot of fun, and it was great to see everybody out here and supporting us…I enjoyed it,” Brown said.