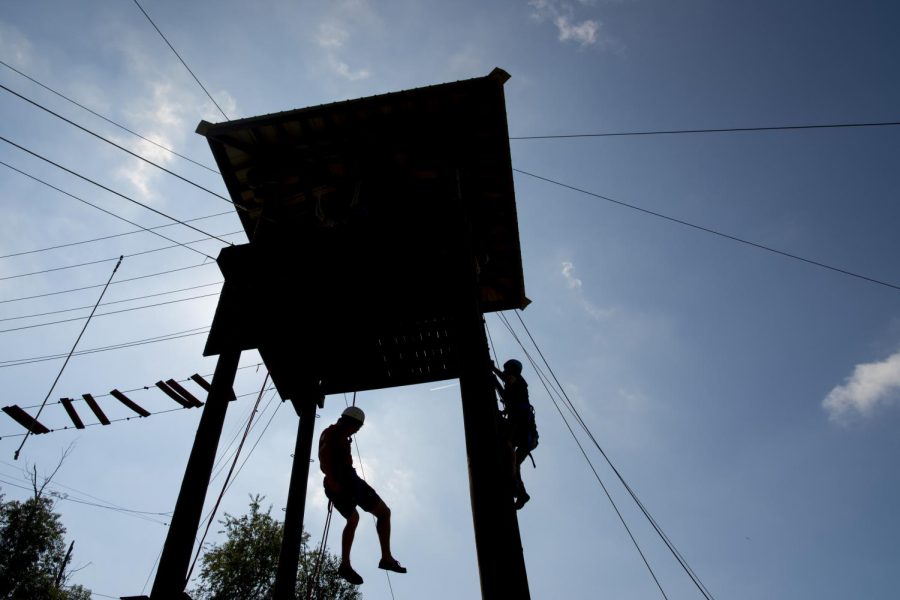 Frankfort senior AJ Snipes, 23, repels down the open face of the WKU Challenge Course as Hebron senior Thomas Kinman, 21, ascends the rock wall. Students in the Recreation Administration major have the option to complete REC 439: Challenge Course Facilitation, for a concentration in Outdoor Recreation. William Kolb/HERALD

Hidden behind WKU’s agricultural farm, a large, grassy area plays host to a giant, towering wooden structure with a series of nets, dangling ropes and zip lines, suspended 40 feet above the ground.

On the ground level, colored noodles and small, square fabric patches litter the green grass, as wooded trails lead off to various other challenges. All of these make up the WKU Challenge Course.

“It’s an opportunity for participants to grow, challenge themselves and try new things,” Tammie Stenger-Ramsey, associate professor of kinesiology, recreation and sport, said.

Many groups have ventured out onto the course, either for a class or as a team building exercise, to challenge themselves mental and physically, strengthening their teamwork skills as they go.

“We are always open to campus groups coming out. We encourage this by offering reduced prices to WKU affiliated groups,” Brooks Riddlesperger, a graduate assistant at the course, said.

Riddlesperger has worked on other courses, both as a student and professionally, especially at his alma mater, the College of William and Mary.

“I was introduced to them (ropes courses) in a class… at William and Mary,” Riddlesperger said. “I have also worked for a summer camp where I facilitated a course as part of my responsibilities.”

Riddlesperger is partnering his challenge course background, both at aforementioned locations and now at WKU, with a degree in recreation and sports administration, with a certificate in outdoor leadership.

“I believe the challenge course is a great asset to WKU. It offers an alternative to the traditional classroom. It also offers a means for groups to grow and become stronger,” Riddlesperger said.

Discussions about building a challenge course started in the 1990s, but it wasn’t until roughly 2004 and 2005 that the actual planning for the course began.

“The High Course was built by an outside company named Cornerstone,” Riddlesperger said. “A majority of the Low Course and trails were built as part of class assignments. We continue to add and modify things as needed.”

The Challenge Course is essentially used as an additional learning tool, Riddlesperger said. Many classes and groups utilize the course to simply promote skills like problem solving and team building. Gatton Academy uses it at the beginning of the school year as a unique way to have new students meet their classmates.

“I had a great time getting to bond with my classmates while participating in the challenge course,” Tom Seibold, a Louisville junior and Gatton alumnus, said. “It was a fun experience that allowed us to get to know each other in a way that would have taken a very long time in the classroom.”