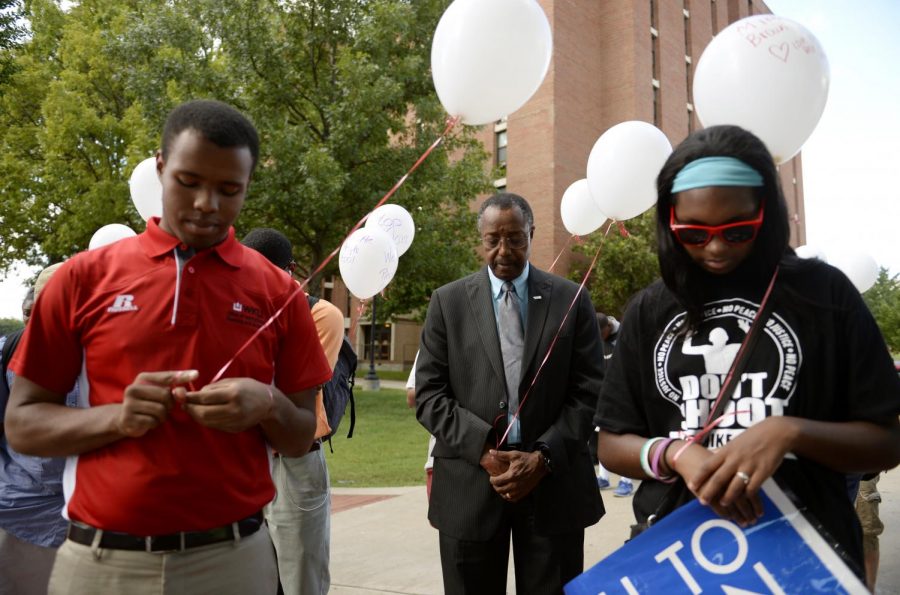 Western Kentucky University Vice Provost and Chief Diversity Officer Richard Miller prays before the "Call to Action" march and vigil on Sept. 16, 2014. Activists marched with balloons that commemorate African-Americans that have died in altercations with police. Harrison Hill/HERALD

White balloons bearing the names of Trayvon Martin and ‘Mike’ Brown bobbed in the breeze as WKU students and faculty climbed the Hill chanting, “No Violence! More Peace!”

About 75 people attended a march and vigil today that started at the Pearce-Ford Tower courtyard and ended at the Chandler Memorial Chapel.

The march and following vigil were organized as a response to the killing of 18-year-old Michael Brown, a black male, at the hands of a Ferguson, Missouri police officer, who was white.

St. Louis senior Karlos Harbor, who lives close to Ferguson, said the shooting made him want to organize an event in response, so he and a friend brainstormed ideas.

“That’s just kind of why we’re here — mobilizing and empowering us as students to get active in our community when we see these injustices happening,” he said.

The vigil featured a poetry reading, a vocal performance and speakers. Lloren Foster, assistant professor of African American Studies, addressed the crowd, urging them to focus on staying safe, despite the injustices they may face.

“When the police stop you, I don’t care how wrong they are, comply,” he said. “You do me no good dead.”

For more on the vigil, read Thursday’s print edition of the College Heights Herald.